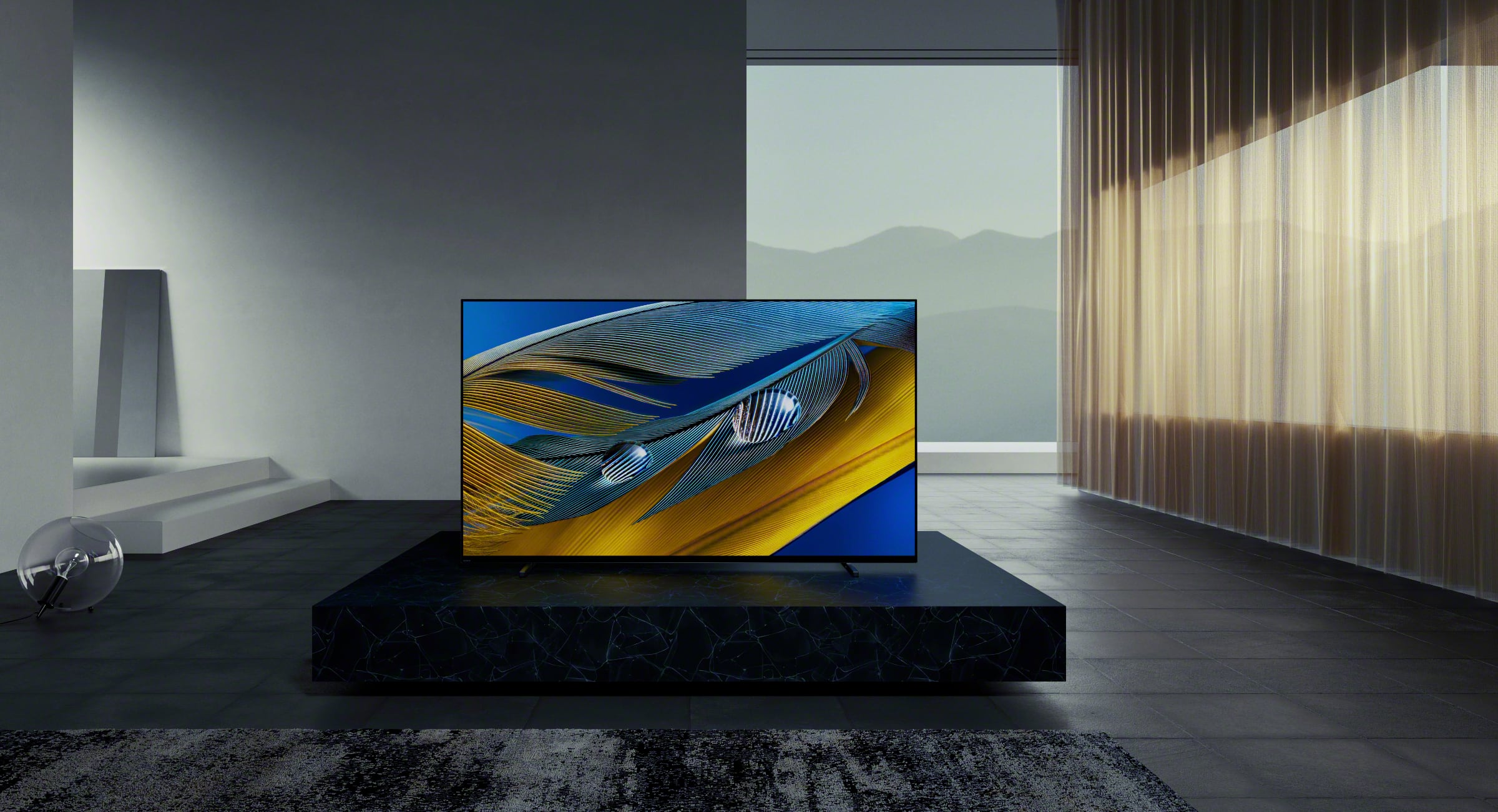 Sony debuted the A80J 4K OLED TV at CES 2021 for the first time. Here’s what’s new with the A80J 4K OLED TV. The model will be available in three diagonals 55, 65 and 77 inches. The A80J series TVs are the direct successors to the Sony A8 series. They provide some improvements to the imaging process.

Unfortunately, the lineup lacks the 48-inch version a bit. Most likely, sales of Sony 48A9 (2020) will continue in 2021. Of course, this is not entirely in line with new technologies, because the model does not have a BRAVIA XR processor and HDMI 2.1 interface. But 55 inches should also look good in your apartment! In our Sony Bravia XR-55A80J OLED TV 4K HDR review, we’ll take a look at the key features of the new model.

The appearance of the Sony A80J TV has not undergone significant changes compared to the Sony A8 series . They mainly concern the design of the 3-position universal stand. The shape of the legs has changed. Now they have the shape of a thin parallelepiped, made of aluminum and perfectly match the look of the case.

The distance between the legs can be chosen depending on which furniture the A80J TV is placed on. The standard leg “spacing” can be reduced for installation on small cabinets. The TV panel can be raised on the legs, and then the soundbar fits perfectly between them. The metal frame is still very thin and doesn’t distract from the image.

There are changes in the design of the rear panel. The Bravia logo has shifted from the strip above the hardware block to a square in the middle. This square is the trademark of the Bravia XR processor. Another thing to look out for is that Sony has adopted a square-mesh embossing on the rear panel instead of vertical stripes.

Three improvements make the A80J 4K OLED series more than a worthy successor to the A8. Incidentally, in previous years, the names of televisions around the world have been confusing. But in 2021, model names will be unified internationally, which is welcome.

Let’s start with the BRAVIA XR platform, which is mainly based on Sony’s new XR processor. The previous X1 processor is being replaced in Sony’s high-end TVs starting with the X90J series. It can be assumed that its successor is the new S900 (MT9950) processor from MediaTek.

XR OLED Contrast is the name of a contrast enhancer that is supposed to provide a vivid picture. The cognitive processor cross-analyzes areas of the scene for color, contrast, and clarity. Thanks to this integration, the image parameters are not adjusted individually for a single area, but for the entire scene. The realism of the picture is noticeably increased.

Dolby Vision HDR, Dolby Atmos, Netflix Calibrated Mode, and IMAX Enhanced are definitely worth noting. Behind Ambient Optimization is an RGB light sensor that optimizes not only the brightness of the image, but also its color temperature based on information about the environment.

A80J series TVs use XR HDR Remaster technology. Consequently, all objects are identified on the screen in order to analyze their color and adjust the contrast to make the scene more realistic. Object-oriented processing has become a trend in recent years, and BRAVIA XR ™ is no exception.

Making OLED panels brighter is a big deal, as this is a key area where LCDs still tend to win. To improve HDR imaging, Sony appears to be developing its current strategy of total local dimming in its superior OLED screens. The company does not reveal how many dimming zones the new models have, and does not talk about maximum brightness, believing that competitors are too fixated on these numbers.

On the Sony 55A80J, the Android TV operating platform becomes Google TV. Consequently, not only the feature set is changing, but also the user interface. Thus, Google Assistant is also integrated with the built-in “hands-free” microphones on the TV even without a remote control.

The Sony A80J TV has built-in Chromecast, Amazon Alexa, Bluetooth, Apple AirPlay 2 and Apple HomeKit. What else? The new premium remote has an aluminum finish and finally illuminated buttons.

Mention must be made of BRAVIA CORE, a new premium streaming service only available to Sony Bravia XR customers. When you buy the A80J, you get (not in all countries, of course) a 24-month subscription (access to almost 100 titles) and 10 Movie credits. With them, you can choose and enjoy 10 films from more than 300 on the list. The bitrate of the video stream is up to 80 Mbps.

Sony has further improved the built-in Acoustic Surface Audio + technology in the A80J 4K OLED TV. OLED TVs from the Japanese manufacturer are the only models that use surface vibration to convert a display into a “speaker”. With new, more powerful actuators, the entire panel can be set in motion.

Don’t worry, the vibrations are not visible! The sound comes more powerfully and in the direction directly from the object in the image. The XR Cognitive Processor can also analyze the position of the sound in the signal to ensure that the sound source matches exactly the object on the screen. An additional subwoofer also provides the necessary rumble. Finally, mention should be made of 3D surround sound scaling, which converts 2.1 or 5.1 system stereo signals to 5.1.2 3D audio. With its low-cost A90J series, Sony just wants to forget about the lack of HDMI 2.1 on its expensive 2020 OLED TVs. The company is looking to the future and the new SONY XR processor is paving the way for a new interface. The A80J and its “big brother” A90J have two HDMI 2.1 connectors. They are certainly backed up by additional HDMI 2.0 ports.

All this provides 4K @ 100 Hz processing with HDR, ALLM (automatic low latency mode) and VRR (variable refresh rate). It is not yet known if ALLM and VRR are integrated into the new models or will be delivered via a firmware update. There are three USB ports, a digital optical audio output and a headphone output. Communication with the air is carried out through a conventional antenna socket and two satellite. You can connect to the Internet via a Wi-Fi network or by wire.

To conclude our review of the A90J from Sony, we emphasize that a lot depends on the price for which we will be offered all the new functionality of the new series. So far, one can only guess, relying on the prices of last year’s A8 lineup. And oh, they are not low! In addition, the timing of the release of the 80-series models on sale has not been announced either. So, before reaching final conclusions, it is better to be patient and wait until digital reality turns into natural.