As OLED TVs become more popular, the market is filled with more competitive models. At CES 2019, Sony unveiled its version of the “Master Series” TVs. At the head of this class of TVs is the Sony AG9 4K OLED Smart TV HDR series. For some markets this series comes with the Sony A9G designation.

The second such series is Sony OLED AG8 TVs (for the US market this is the Sony XBR A8G), which is as interesting as the flagship line. It’s not hard to guess that the design of this series strongly resembles last year’s Sony AF8 series . Note also that at the same exhibition Panasonic was able to demonstrate its new line of GZR2000 (GZ2000, GZW2004) OLEDs with very interesting innovative characteristics.

Does Sony have TVs like this that will get more attention? Let’s try to understand the Sony KD-55AG9 review with some characteristics. Perhaps Sony AG9 TVs will be able to win the competition for the podium this year.

Let’s start with the novelties and highlights of Sony’s AG9 specifications. This is a slim wall design with a thin bezel design. Sound system “Acoustic Surface Audio Plus” consisting of special drives and a pair of subwoofers. The presence of a voice search in speakerphone mode, which is based on the “Google Assistant” that starts immediately at the start of the system. Dolby Atmos immersive audio is enhanced with an updated Android TV system. With different diagonals of 140, 165 and 196 cm, the first thing that catches your eye is the very thin panel in the AG9 models. Even with the screen installed on the stand, the TV is close to a vertical surface (wall). The stand does not have any chrome legs.

There is nothing superfluous, no distracting eyes from the screen. This design is an advantage for the new AG9 OLED models, as Sony claims the TV will sit very close to the rear when wall-mounted. So close that it looks like a photo frame on the wall. Very neat design.

Decorative thin bezels surround the TV panel. The discrete arrangement of the sound-emitting system is located throughout the panel and does not make its own adjustments to the design. Unfortunately, it was not possible to feel the sound of the system in full. But the interesting design of the Panasonic GZR2000 has been taken into account by Sony and redesigned. Therefore, the screen in the AG9 series with the home theater setting turned on emits sound like the center speaker.

As for the Smart TV platform, both Sony AG9 and AG8 series are equipped with Android TV version 8.0 (Oreo). The standard Google Assistant is built-in and is available when playing TV programs and movies. Microphones for voice control are built into the remote control and the TV.

Sony’s AG9 series adds a new smart remote control. In particular, according to the manufacturer, control of peripheral devices such as cable or satellite receivers, Blu-ray players and game consoles has become much easier.

The console is equipped with the function of transmitting signals over a radio frequency bridge. The TV can now be controlled without clearly pointing the remote at it. The user interface of Android Oreo 8.0 has been adapted in the new series. This affected the function of quick access to favorite applications and TV settings.

Because of this, the performance of the Smart TV platform as a whole has been increased. Some of the numbers that the manufacturer claims are: OS Android TV is about 60% faster; the same numbers when opening applications; 50% improvement in YouTube performance and 60% improvement in Netflix streaming; access to pages in the Andoid browser is 30% better. 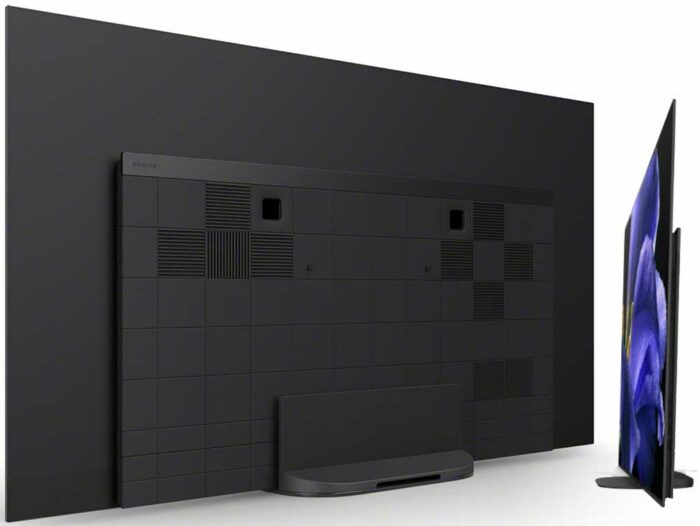 The AG9 remote control has a voice search function, so it is very easy to use the Google Assistant. Android TV interface is standard, but slightly updated. High level of compatibility with Apple devices. Alexa and AirPlay 2 support will be available in select markets. The Sony AG9 Android TV series will thus be compatible with Apple AirPlay 2 and HomeKit.

New features include support for IMAX Enhanced. This is special content that is compatible with this feature. That is, as the developers of this standard declare, “the content on the screen should be reproduced as the filmmaker intended.”

IMAX is slated to launch in mid-2019. Such content will be distributed via Rakuten TV streaming. First, the option is planned to be used in European countries Spain, Germany, France and Italy. More countries will then join the list, according to Sony.

Image calibration mode from Netflix is ​​included in the specification. This is the second feature that was designed to provide the kind of image quality that the content creator has in mind. By enabling this option in the menu, “Netflix Calibrated Mode” will automatically play premium picture quality.

Of the highlights in the AG9 series, the following specifications can be noted: image processing using the “Picture Processor X1 Ultimate” with an object-oriented algorithm; installed OLED panel with excellent black levels; Dolby Vision HDR compatible and “Netflix Calibrated” mode.

As we recall, the Sony AF9 TVs have a “Pixel Contrast Booster” function. The new OLED Sony AG9 has this same feature. What’s the point of the Pixel Contrast Booster? Since last summer, LG Display, which provides OLED panels to all other brands of TVs, has left “free access” at the hardware level for full control of screen pixels.

Therefore, all brand manufacturers using LG Display OLED matrices began to develop their own pixel controllers for these matrices. The result of Sony engineers became obvious – a higher average brightness level of the entire panel “ABL” (Average Brighness Level) and better color rendition with high brightness for more textures. All this improves the accuracy of the image. However, at the time of publication, the peak brightness value of the Sony AG9 is unknown. It is roughly at the level of AF9 models.

The capabilities offered by the X1 Ultimate image processor last year allowed engineers to refine the Object-Based Super Resolution technology. A modified new algorithm detects and analyzes every object in the image. Picture details have been individually optimized for crisp textures.

There is a great depth of field, close to natural reality. Of course, the Super Bit Mapping 4K HDR image processing process makes adjustments to reduce or eliminate artifacts. This picture adjustment item can be adjusted in a separate menu.

Object-oriented image processing with dual database has several million visual effects to best match the original signal and display it on the screen. The X Reality Pro 4K engine is MotionFlow XR scaling and dynamics compensation.

Naturally, the new AG9 series has a 4K HDR label, which stands for HDR10, HDR HLG and HDR Dolby Vision support. In fact, we did not see anything new. It is difficult to assess the quality of the image on exhibition options, which usually show specially created content for such events.

Of course, the videos shown on the Sony 55AG9 look amazing – bright, colorful, with rich blacks. But before talking about all the delights, the prototype should be tested. Only then can we talk about the overall performance of the new model.

If we compare the AF9 and AG9, then the new product seeks to avoid the criticism that was in last year’s models – the lack of brightness compared to competitors. In our opinion, only the tweaked Pixel Contrast feature can make some improvements to Sony’s 55AG9.

As for the new “Acoustic Surface Audio +” feature in Sony’s AG9 TV series, there are three dedicated acoustic transducers. They are located on the right, left and center of the screen, just behind the matrix. The transducers vibrate the matrix surface to transmit sound vibrations.

But that is not all. After the sale of the Sony A1 series TVs, Sony engineers added the ability to connect an additional speaker system to the new models through the terminal block on the back of the TV. Moreover, this is not the “output” from the TV, but the “input” of the central channel for an external source.

Now, when you turn on the special option in the “Surface Audio +” system, the AG9 screen becomes the center speaker in the home theater. It turns out that the Sony AG9 OLED TV does not require an additional center speaker, which needs to be located somewhere above or below the screen! Agree, a good and elegant subwoofer solution.

In addition to the standard interfaces that we always find in all the latest models, there is something deserving about the Sony KD-55AG9. Namely, HDMI 2.1 interfaces with eARC support. Although eARC was already in last year’s models. Three USB ports (2.0 + 3.0), a pair of satellite (Main and Sub) inputs, composite input, 3.5 mm headphone output. In addition to the built-in Wi-Fi and Bluetooth interfaces, NFC support appeared.

The entire AG9 series has retained the specifications of this manufacturer’s previous flagship model. Some kind of innovative and breakthrough innovations were “avoided”. “Pixel Contrast Booster” and “Acoustic Surface Audio” technologies were reviewed in last year’s Sony TV series.

Object-oriented processing and image scaling repeat the work of the previous flagship versions of the manufacturer. It is possible that the Pixel Contrast Booster will make changes and you will notice the difference.

The AG9 sound system has received a cosmetic update.  The final conclusions about the performance of TVs in the reviewed Sony 9 series will appear only after testing new models in the laboratory.