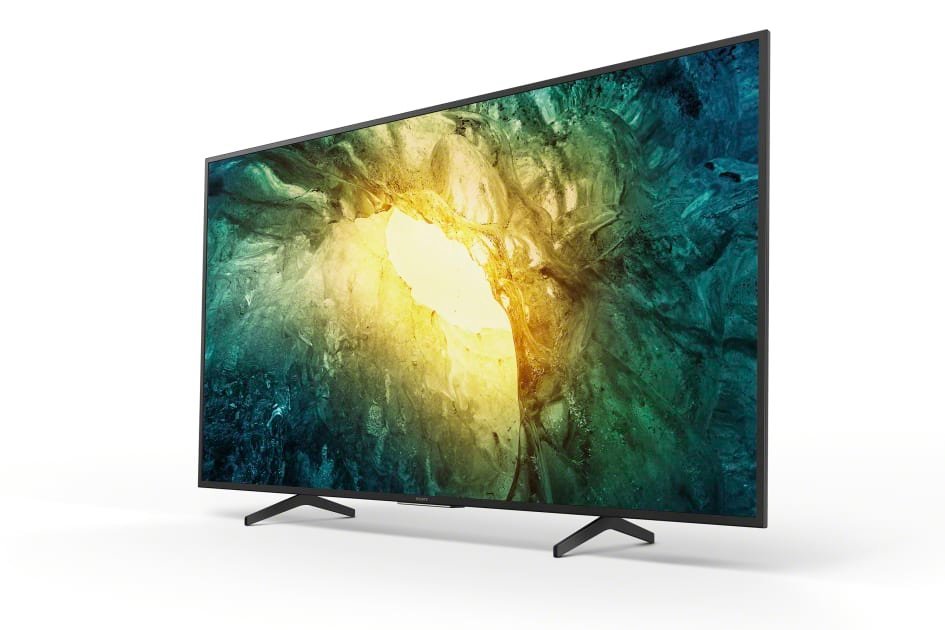 In 2020, the X70 Bravia is the very first rung in Sony’s 4K lineup. The Sony KD-55X7055 Bravia Ultra HD TV from the Japanese manufacturer is available in four sizes. The X70 Bravia series is the successor to last year ‘s XF70 series , which looks very similar at first glance. But what does Sony’s new entry-level model offer?

Is it true that useful features are only available in high-end models, or is it possible to access them by purchasing a budget model? In the proposed review of Sony KD-55X7055 Bravia Ultra HD HDR, using the example of a 55-inch TV, we will try to identify the advantages and disadvantages of the X70 series from Sony.

The X70 Bravia TVs have a pretty solid design for their price range. Two Y-shaped legs support the TV so that it hardly sways. The perimeter bezels are slightly wider than Sony’s higher-end models.

However, it does not distract so much from viewing the image. The back is half metal, half plastic. For cable management, two clips are included to secure the cables to the stand.

If the TV is wall-mounted, Sony does not provide any options for good cable management. Therefore, the user himself will have to get creative. VESA wall mount not included. Overall, the X70’s workmanship is well above average. The Sony X70’s 10-bit (8-bit + FRC) VA panel generally delivers good black levels and relatively high contrast, although it doesn’t have local dimming to improve contrast further. Therefore, it is best to watch TV in a dark room. The biggest drawback of the VA panel is the viewing angles.

When viewed from the side of the Sony X70 TV screen, the image will appear blurry. Therefore, it is recommended to place the TV directly in front of the sofa. The layer for increasing the viewing angle is only used on higher quality Sony models. For entry-level models, peak brightness typically does not exceed 340 nits.

This means that this TV is not very suitable for HDR content. However, the Sony X70 TV offers a wide gamut of color space. HDR10 and HLG are supported, but HDR10 + and Dolby Vision are unfortunately not available. When it comes to handling motion, the first thing to consider is the refresh rate, which is 50Hz for this panel.

The response time is really good for a VA-LCD display. It is just over 4ms. This response time cannot be surpassed by other conventional LCD displays. Only OLEDs can be better in this regard, but they are much more expensive. The backlight of the X70 is completely flicker-free.

This means that all content can be displayed very well with fast movements. In addition, there is a black border insertion function that helps to further reduce image blur. Unfortunately the TV has a shake problem. In terms of the gaming category, the Sony 55X7055 Bravia TV unfortunately doesn’t have much to offer. Its input lag is relatively low, which is a big plus for gaming. However, it does not have other features to improve the gameplay.

The Sony X7055 Bravia TV does not have an automatic low latency mode or variable refresh rate to avoid screen tearing. This budget TV cannot be criticized for the lack of HDMI 2.1 . Such connectors are built into only more expensive models.

Due to the narrow viewing angles, multiplayer will not be as fun as single player as colors fade at slightly slanted viewing angles. Accordingly, the X7055 TV is probably not the best choice for gamers.

The sound of a 2.0 stereo system with a 20W output is acceptable as it is very well balanced. The TV can be quite loud, but this can lead to annoying distortion. In terms of audio formats, the Sony X7055 offers DTS, which is not found in current models from LG and Samsung.

However, there is no Dolby Atmos format. Like other models in this price segment, it makes sense to purchase a soundbar for the best sound. An example of such a panel is the Sony HT-G700 soundbar with a total power of 330 watts.

Unlike the more expensive Bravia models, the X70 does not run Android 9.0 Pie, but a Linux-based OS Smart. Its menu is pretty self explanatory. The system works pretty smoothly. Only navigating with the remote control takes some getting used to.

Channels like Netflix, Amazon Prime, and Youtube are already pre-installed. Otherwise, the selection of applications is generally rather scarce. It is possible to use the USB recording function. It also has its own internet browser.

Sony’s X70 series has 3 USB 2.0 ports and three HDMI 2.0 ports on board. One of these ports has an ARC channel. There is also a TosLink optical output, composite input (Video + L / R), an antenna input, a CI + 1.4 slot for pay channels, an Ethernet RJ45 line-in and an audio line-out for connecting headphones. Of the wireless connections, there is only Wi-Fi.

As expected, the Sony X70 is an entry-level model that doesn’t have any amazing specs that make it indispensable for a specific purpose. Rather, it is a reliable device for regular nighttime TV broadcasts.

The Sony X70 Bravia series is equipped with a VA panel that provides good images even in darker conditions than in bright, sunny rooms, but with a limited viewing angle. Therefore, viewing by a large team will not bring comfort. The design is modern and even higher than the entry-level models. This TV looks great in almost any living room.

If the consumer is not planning to buy a fully equipped home theater on the one hand and a new gaming TV for future consoles on the other, then they will be satisfied with the purchase of the X70. The reason for this is the low price and very good input lag. Other missing game features such as HDMI 2.1 input are only relevant to next generation consoles and do not currently affect other applications.