In the second half of 2018, Sony released a couple of flagship TV series, but at CES 2019 announced their discontinuation in favor of new advanced models. The X-Wide Angle technology was found only in the models with diagonals of 75 and 85 inches, and it was absent in the more familiar 55 and 65 inch TVs.

The new Sony XG95 series has FALD dimming, supports Dolby Vision and Dolby Atmos, HDMI ports with eARC standard, and the operating system in these models is Android Oreo 8.0. The Sony XG95 series TVs are presented on the European market as the Sony XG9505, and in the overseas version, the Sony X950G with screen sizes of 55, 65, 75 and 85 inches.

Today on UltraHD.su we would like to review the Sony KD-55XG9505 review with the remark that the KD-75XG9505 (XBR-75X950G) and KD-85XG9505 (XBR-85X950G) models are equipped with X-Wide Angle. Therefore, if this technology is found in the text, then it is applicable only to large diagonals.

Modern flat screen TVs without built-in soundbars or other additional elements usually look very similar in design to last year’s models. The XG9505 series is no exception. It looks a lot like last year’s XF90 line (XF9005) with some minor changes.

Differences include the rough embossing of the back of the case and the glossy top. Sony representatives have confirmed that the XF90 (XF9005) looks will be borrowed and seen in 2019 models, including the flagship XG95 series of LCD TVs.

The TV is quite thick, which is to be expected due to the FALD technology. As with last year, Sony has designed the I / O ports to either face down or to the side. All HDMI 2.0 ports can now support 4K HDR @ 60Hz. There is support for eARC, which enables playback of Dolby Atmos and Dolby TrueHD.

The built-in speaker system received two additional channels. Sony has placed them on the top rear of the case. Speaker sizes vary by screen diagonal. For the “younger” versions, the emitters are 25×90 mm in size, for the “older” versions – 25×135 mm. The sound scheme of the TV is built according to the “2 CH side back + down ring” scheme, the total power is, as always, 2×10 W.

The TV stand has not changed. It has a cable management system, but this solution is reserved for Sony 8K TVs. Anti-reflective coverage is average, but not as low as, for example, Samsung’s Q-series TVs and various OLED TVs. And last but not least, the company has developed a new remote control, which will be discussed below. All Sony TVs in 2019 come pre-installed with Android Oreo (v 8.0) OS and upgradeable to Android 9.0 Pie. The XG95 series in question is equipped with a MediaTek 5893 SoC, but with a more recent modification of the UR2 compared to the AF9 (UR1). The performance has remained the same, but the processor’s RAM is less.

Android Oreo introduces a redesigned home screen for ease of use. In addition, the channels can be redefined by the user. Android Oreo in the XG95 series has received an update in the form of enlarged icons with rounded corners. In general, the “wrapper” of the system is very similar to Android in AF9.

After comparison, you will notice that there are some changes in this area in the 2019 models. One of the big changes is that Sony has finally gotten to an update to the user interface, that is, components that are different from the familiar Android system.

Image and sound settings, as well as some other gadgets, as a rule, are not built into Android. Therefore, the menu in the icons of Sony is very different from the menu of Philips TVs on the same Android. The basic part of the system will be updated from time to time, for example, the TV guide function, the settings menu, the program information panel, etc.

In addition, it was noticed that the YouTube application now supports HDR format and is able to automatically switch to this playback mode. But when using the built-in Sony media player, USB playback often does not start right away. On the other hand, the media player application is noticeably faster in terms of navigation compared to the XF90 (XF9005) TVs.

Early Sony TVs had an uncomfortable Action menu. Mini-plots moved from top to bottom. Later, the manufacturer added the “Discover” mode, in which, while viewing the main screen, the menu scrolls from bottom to top. Since the beginning of 2019, Sony has completely abandoned the “Action” menu and moved everything to the bottom menu like Samsung or LG. The updated menu contains shortcuts to various interfaces, user-configurable settings and a TV guide (while watching TV). We saw something similar in webOS from LG.

At CES 2019, Sony announced support for Apple AirPlay 2 and HomeKit on select 2019 TV series. However, these features are missing in the XG95. Perhaps this will be corrected in the future with a software update, as it was previously with Dolby Vision support. Note that AirPlay and HomeKit are still included in the Sony repository.

Before AirPlay, you can use the built-in Chromecast feature. But it still only supports 60Hz like all previous Android TV models, so there may be delays when playing content at 25 and 50 fps.

Google Assistant has been around for a long time, but some regions of distribution may have restrictions. The XG95 series has microphones built into the bezel for voice commands. To start “communicating with the TV”, you need to activate this function in the desired menu item.

But Sony is still using Android Oreo since Q2 2016. However, updates regularly add some new features, so check for updates after purchase. By the way, we note that TVs based on Tizen and webOS do not receive major updates.

After a long silence on criticism of remote controls, Sony has developed a new control concept. The updated remote no longer has a nasty rubber surface and soft plastic buttons. Instead, the remote has a metallized surface with small and high-quality buttons.

Now there is no circle of buttons around the navigation keys. These shortcuts have been moved to a different location to make it look more organic. The redesigned remote has roughly the same number of buttons as previous versions, so it represents a traditional approach to TV control, as opposed to the more simplistic Philips or Samsung remotes.

The top of the remote is made of metal and the back is made of textured plastic. Although to the touch, a soft plastic or, ideally, an all-metal remote control would be preferable. The new remote control is thinner than the previous one, but about the same weight.

The TV channel switching interface is part of Sony’s proprietary system. Here the manufacturer has made several changes. You can now access “TV Guide” from the bottom menu. In the European part, Sony XG95 TVs support TV recording. But the “Time Shift” function, which is supported in Philips TVs with Android, has not yet been implemented.

In addition, when PiP is running, you cannot watch two TV channels at the same time. Changing the channel, as in last year’s models, takes about 2 to 5 seconds, despite the faster SoC processor. The TV guide has become noticeably faster compared to previous models.

We talked about sound a little earlier – Sony added two additional tweeters at the top (one on each side). This adds the effect of a larger soundstage and gives the impression that the sound is “coming straight from the screen.” However, the system is limited to just a pair of 10W speakers. These are not separate Dolby Atmos channels. Overall, the speaker lacks bass and depth. 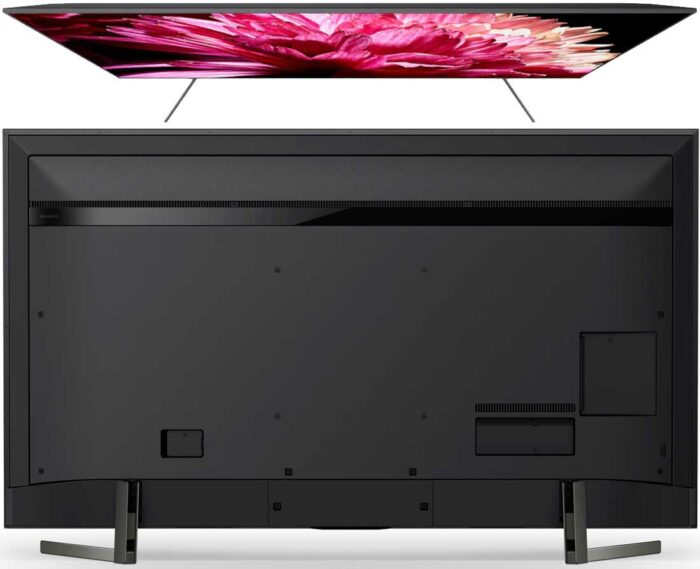 As mentioned at the beginning of the XG9505 review, the series in question uses different LCD panels depending on the diagonal. The 55 and 65 “TVs use the usual VA matrix, and the 75 and 85” diagonals use the VA matrix with the “X-Wide Angle” technology. This technology, in short, involves an extra layer on the surface of the sensor to improve viewing angles.

Indeed, for huge VA sizes, the matrix will look mediocre without it. When it comes to peak brightness in the XG9505 series, we can say that this figure is 1000 nits, which is slightly lower than last year’s XF9005 series. With test images, you can see that the brightness drops at the time when we reduce the size of the displayed bright area.

As soon as the test “square” on the screen becomes smaller in area than the shaded area, then it is especially noticeable. This technique is deliberately designed by the manufacturer to reduce the halo around a bright object on the screen. The number of dimming zones is relatively small – 5 horizontally and 12 vertically (60 zones in total). We have already seen this in the XF9005 series.

In principle, a peak brightness of 1000 nits is sufficient for high-quality playback of HDR content. But there are examples of more advanced TVs, notably the Samsung Q900R from the 8K series. It is possible that Sony 8K TVs will surpass this masterpiece.

As the brightness and black levels increase, the X-Wide Angle filter will be negatively affected by the XG9505 TV. Contrast measurement with HDR playback of test images resulted in a black level of 0.25 nits, which is too much for a premium model. But if we compare these indicators with IPS matrices, then everything looks good.

The backlight control in the XG9505 series is good. There is no noticeable lag like in the 2018 Samsung QLED models . However, good backlight control does not prevent bright objects from flashing and ghosting in deep blacks. This negative effect can be slightly reduced by adjusting the local dimming setting. The XG9505 TVs are equipped with the Sony X1 Ultimate image processor. The same processors are used with the AF9 series. The processing is at a high level and does not depend on the “input” content. The Smooth Gradation function reduces image gradation artifacts, which is quite effective.

But the algorithm is completely unable to remove the “heavy” posterization artifacts that are usually seen in highly compressed content from streaming services. The fault lies in the source of the video, not the TV. In addition to the usual support for HDR, the series has Dolby Vision.

Powerful processor provides the smallest input lag in game mode. Starting at 1080p input resolution, this figure is just under 22ms. It’s better than AF9 series TVs. In normal mode, the input lag is at 86 ms.

Last year’s Sony ZF9 TV series has already been discontinued. Sony KD-55XG9505 will rightfully take its place as the manufacturer’s flagship 4K LCD TV series. In this series, only 75 “and 85” TVs have “X-Wide Angle” technology. According to some experts, these models take the middle place among VA and IPS LCD TVs in terms of viewing angles. Which is the best of these two options is everyone’s own business.

As for the image. Sony XG9505 has automatic CalMAN calibration. There are blackout zones (but their number is relatively small), reduced input lag, Dolby Vision support, a good Sony video processor and X-Motion Clarity dynamics processing. Finally, there is a new remote control, which is an evolution (from this manufacturer), but not a revolution compared to previous versions.