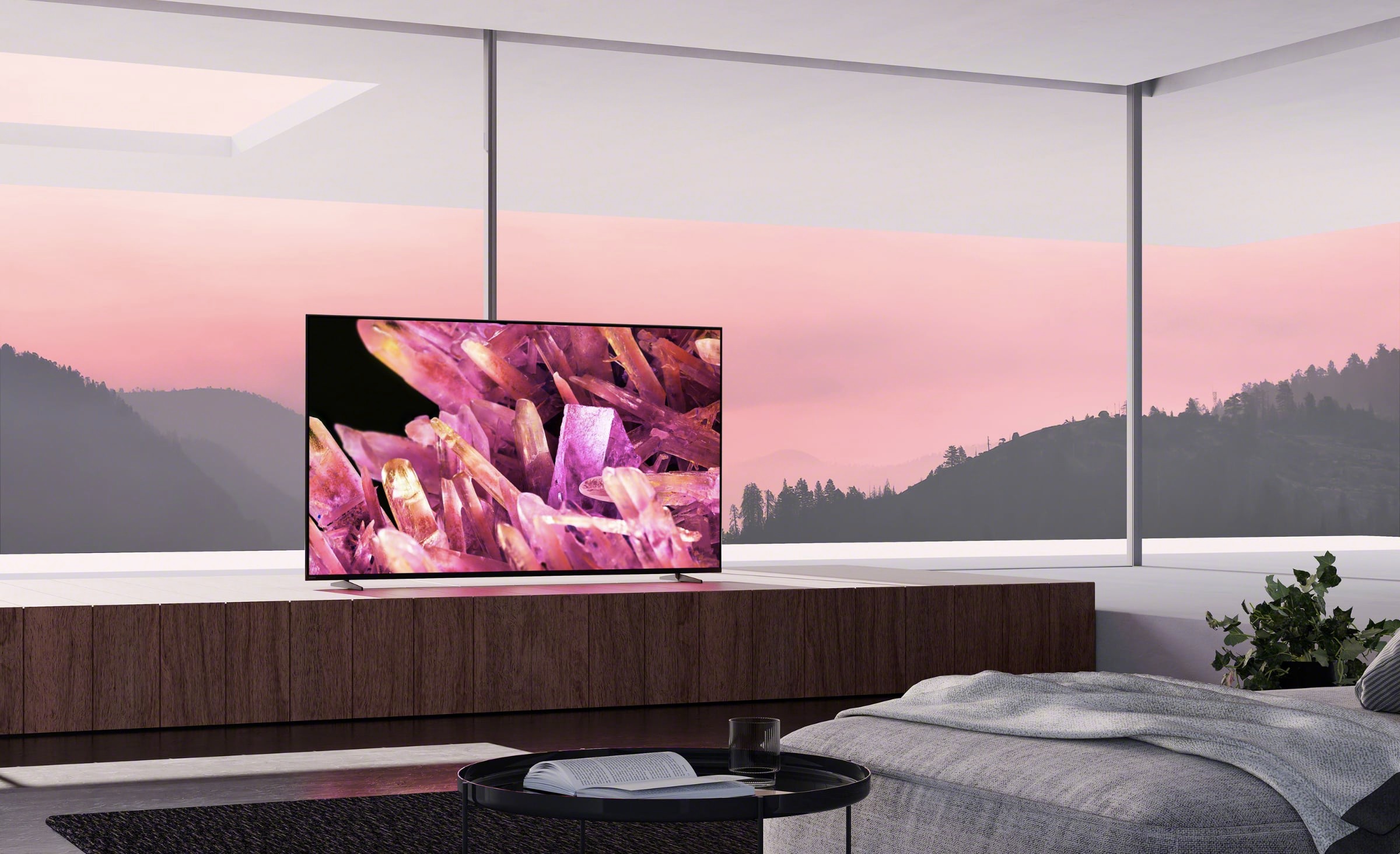 The Sony X90K is the latest in a long line of popular 4K LCD TVs from Sony, most recently the X90J. Compared to last year’s X90K, the TV is equipped with a new version of Google TV, an updated Sony XR cognitive processor. It also still has 4K resolution, HDR support, and HDMI 2.1 support (with limitations).

Sony sells both OLED and LCD TVs, but doesn’t necessarily consider the former to be better than the latter. We mention this because it helps explain Sony’s approach to the XR-55X90K as a mid-range LCD TV with an almost obsessive desire for what premium models have: high brightness. In the Sony Bravia XR-55X90K 4KHDR TV review, we will look at how this is implemented in practice, as well as the main features and characteristics of the new product.

The Sony Bravia XR-55X90K TV looks like most Sony LCD TVs thanks to its thin black bezels (1 cm wide), two-legged stand and modular back panel. The Japanese company’s conservative design language ensures that the X90K will fit into most typical living rooms. And in general, this is not a conspicuous design of the TV – a lot of glossy and matte black plastic.

Since the X90K series has a full array direct backlight, the TV is not thin. But its thickness does not exceed 7.2 cm. The stand with two legs can be installed in both wide and narrow positions, since there are two mounting holes on each side. The legs take up some space behind the screen, so make sure your furniture is deep enough to accommodate the TV.

The position of the legs is easy to change if you later want to move the TV to another room. It is possible to raise the legs by 4 cm to the position of the soundbar. In this embodiment, typical soundbars will not block the image. The Sony TV is also available with a central oval stand (X92K) and side feet (X93K, X94K).

The ports of the 55X90K TV are directed sideways, and this contributes to the closest placement of the case to the wall when mounted on a VESA bracket. There are two clips to organize cable routing. Build quality is generally decent. The rear panel flexes slightly due to its size. The stand holds the case steady with little wiggle.

The X90K has what Sony calls the XR Cognitive Processor. It’s a technology the company touts as being able to understand how people see and hear, allowing you to optimize the contrast, brightness, and colors of your content depending on what’s going on. You can promise a lot, but how everything looks in reality, it’s hard to say for sure.

Paired with this cognitive processor is a new contrast enhancer that complements Sony’s already renowned processing quality. As a result, upscaling up to 4K is fantastic. Poor highlight gradation due to low bitrate content is perfectly corrected and smoothed out.

Although the VA panel used has traditionally narrow viewing angles versus IPS , you still get good contrast and color when off-center in the Sony X90K. A more significant problem with the XR-5590K is that it tends to flare easily. The screen is glossy, and the brightness of the TV is not enough to suppress even the slightest reflections.

But the black ones are amazingly black. And, as mentioned, while the TV is still not particularly bright (peak brightness in SDR is around 500 nits, and in HDR it does not exceed 800 nits), its ability to bring blacks to such a depth means that it can generate some outstanding HDR visuals. including Dolby Vision. The downside of this contrast is that it’s hard to find a balance between shadow detail and not blurring all the colors.

Sony doesn’t publish the number of local dimming zones, but a manual count in the X90J showed 24. The company regularly states that the number of zones is a spec that doesn’t match how Sony uses them, and to some extent, this can be accepted. Sony seems to be doing a lot more with 24 zones than any other manufacturer, but it still has limitations. These zones are quite large, and in a clean test environment, you can clearly see that bright objects on a black background create a very noticeable halo.

Unfortunately, content played on the Sony X90K at a lower frame rate (such as movies or TV shows) may stutter when panned slowly. Stuttering refers to shaky, jerky video, and is especially noticeable around the outside of the frame. In game scenes that run at 60 frames per second, this is not visible.

HDMI inputs 3 and 4 support 4K 120Hz, while HDMI inputs 1 and 2 support HDMI 2.0B ports. The Sony Bravia 2022 supports Auto Low Latency (ALLM) and Variable Refresh Rate (VRR). When X90K detects a game source such as PS5, it will automatically turn on the TV if it is turned off and switch to game mode.

Game Mode disables many of the image-enhancing processes in exchange for low output latency. However, this technology is limited to Sony devices, so it won’t work with Xbox and you’ll have to manually switch from the remote and manually lock your settings. And even without active 4K processing, games look fantastic on this TV.

The Sony XR 55X90K TV runs on version 10 of Google TV, an improved version of what was once called Android TV. The OS places more emphasis on custom content than apps. Google TV runs very smoothly on the X90K, and web browsing is excellent. Google is also good at keeping track of what content you like by watching different apps.

One of the bonus features of this TV is the Bravia Core streaming service, which Sony only offers on select TVs. It promises higher quality streams for some movies due to more data being delivered. As with the Sony A90K , it is possible to connect a Bravia Cam.

It will be able to adjust the image and sound based on your location, and also provides some additional control options. Voice control from the remote control has quietly become a familiar feature. Just like displaying images from mobile gadgets directly to the Bravia X90K TV screen. Now you can calibrate the image using Calman software.

The X90K remote has been redesigned from the 2021 Sony TV. It does not have numeric buttons, but there is a button to call the virtual keyboard. This made it possible to reduce the size of the remote control. Its four quick launch buttons actually represent all the famous and popular streaming platforms: YouTube, Netflix, Disney+ and Prime Video.

Sony has incorporated a very impressive sounding audio system into the X90K TV and uses not only the speakers behind the TV, but also behind the display itself. Sony says the sound has improved a lot because of this. However, in practice it is not so close to perfection. Better than competitors, but still.

The Acoustic Multi-Audio system has an XR Sound option that converts a stereo signal to virtual 5.1.2 circuitry for surround sound. But keep in mind that even adding more speakers and intelligently configuring them won’t solve the flat-panel TV’s sound clipping problem.

There simply isn’t enough space in the cabinet to support the wide range required for immersive sound. In particular, the Bravia X90K has very weak bass, just like all thin TVs on the market. If you care about sound quality—and you absolutely must—buy a soundbar. And even more preferably a real surround sound system.

Sony X90K series TVs support eARC , which allows you to transfer high-quality audio formats to an external receiver or sound bar via HDMI. Composite input (shared with S-Center Speaker input) requires an adapter, which is not included.

The patch panel contains a digital optical audio output, antenna inputs (the number depends on location), a 3.5 mm headphone output and a LAN port. There are also two HDMI 2.1 ports and a pair of HDMI 2.0 inputs. The TV has two USB ports, one of which is USB 3.0. Wireless connections include Wi-Fi (2.4 GHz, 5 GHz) and Bluetooth 4.2.

One thing the X90K TV does right that no other manufacturer can offer is picture quality. Color reproduction is outstanding right out of the box, and Sony’s processing is second to none. But much of what makes this TV great can also be found in the X90J, which is more affordable. All in all, as a good all-round TV for SDR content (movies, series, sports, games, etc.), the Sony X90K is well worth recommending.

In preparing the article, materials from https://ultrahd.su/tv/sony/bravia-xr-55x90k-obzor.html were used. Visit article here.