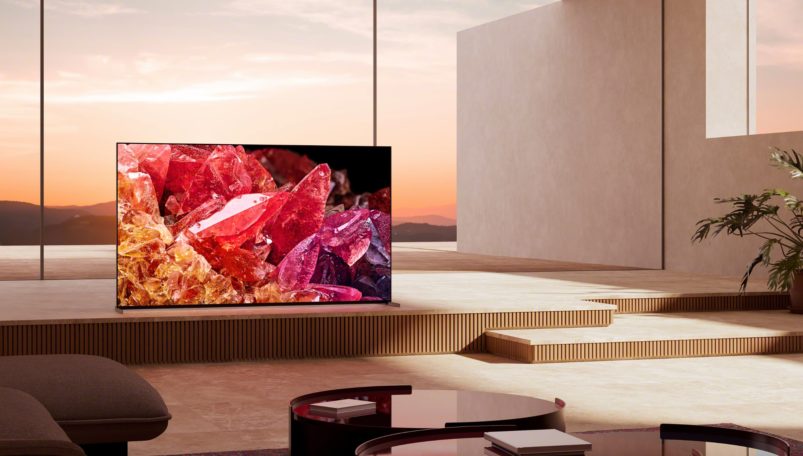 Sony’s flagship Z9K (8K) and Sony X95K series are new TV series in 2022 with mini LED backlight. It turns out that Sony in new products simultaneously uses four image processing technologies. Because ordinary LCD TVs with FALD have been joined this year by mini-LED models and the new Sony A95K QD OLED series. 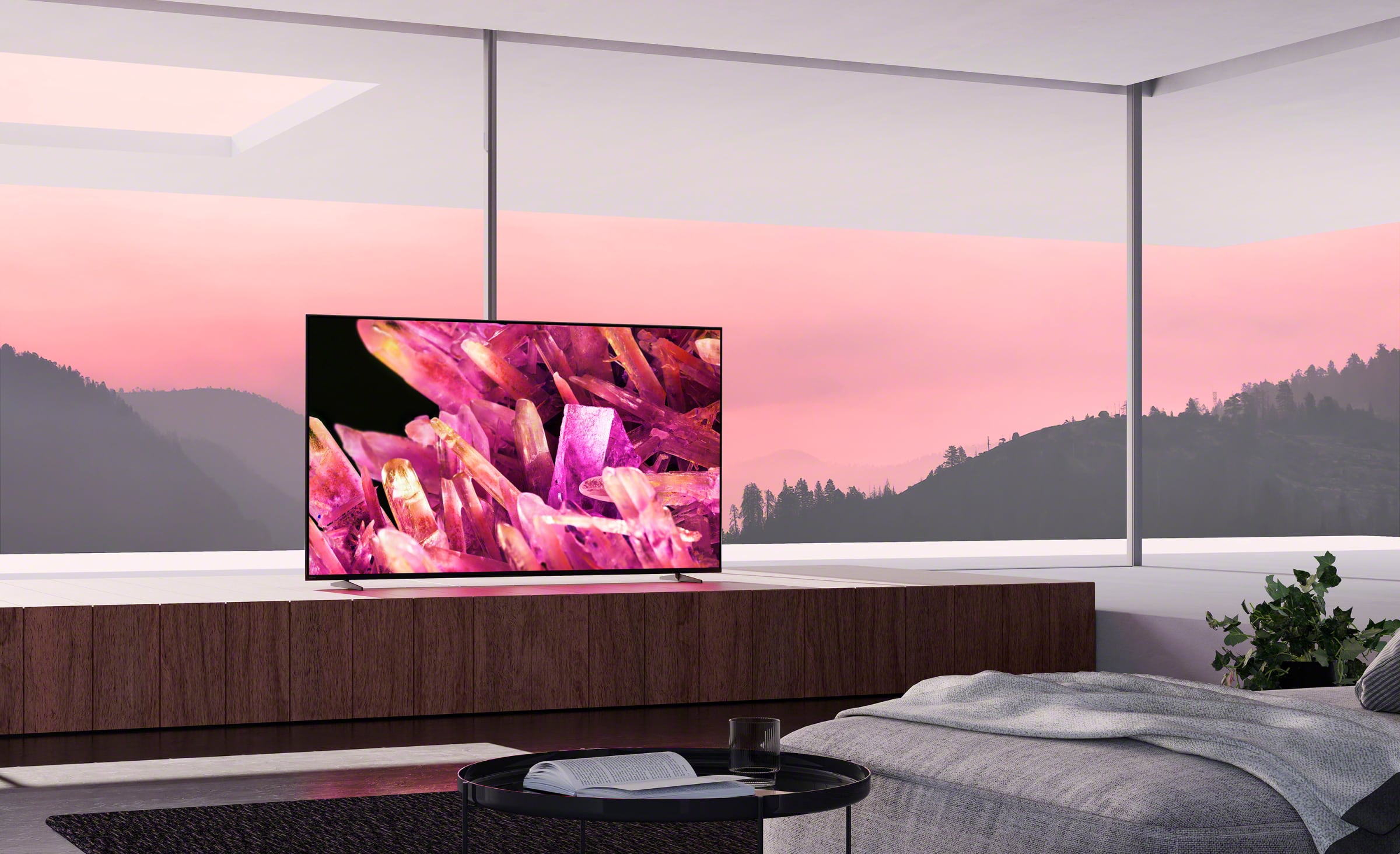 But let’s get back to the X95K and consider in the Sony XR-65X95K review a model that is in Sony’s premium segment. The TV must compete with well-known TV brands in a number of ways. In 2022, the successor to last year’s Sony X95J series will receive two major updates.

Before considering the TV, let’s draw parallels between the X95J and X95K. What these series have in common is the same LCD TVs with the XR cognitive processor, as well as X-Wide-Angle and X-Anti-Reflection technologies. The Acoustic Multi-Audio sound system provides excellent and immersive sound. So Sony XR-65X95K is definitely similar to last year’s series.

Since the X95K series is available only in large diagonals, the design decision was borrowed from last year’s X95J series. The case is quite thin with the characteristic features of last year’s series. The legs of the stand are located closer to the edges of the screen for the stability of the models. The color scheme is metallic silver. The interface part is located like its predecessor.

The main innovation is the screen, which is no longer equipped with a direct FALD backlight. The Sony X95K series adopts thousands of ultra-thin mini LEDs, which have hundreds of dimming zones. This allows more precise control of the backlight’s brightness distribution, resulting in improved contrast and peak brightness.

However, there are difficulties that need to be implemented using a powerful computational process. Controlling thousands of mini LED backlights is not easy. Otherwise, when the figures are displayed on the screen, the chess structure of such illumination becomes visible.

It is to solve problems with the right backlight in the new Sony X95K that Sony XR Backlight Master Drive technology is used. It assumes an algorithm that optimizes the control of the Mini-LED backlight. Sony fans will certainly remember the Backlight Master Drive technology in the legendary Sony ZD9 series or in the first Sony ZG9 series of 8K TVs . Both lines were ahead of their competitors in their time.

In the Sony 65X95K TV, compared to the 2021 model, the manufacturer managed to increase the maximum brightness and minimize the annoying backlight flickering effect. Thus, it turned out to provide a significantly better contrast ratio.

And thanks to X-Wide-Angle and X-Anti-Reflection Coating technologies, viewing even from steep viewing angles is now possible. Therefore, a real high-quality TV with 4K resolution and Mini-LED backlighting can be called the Sony XR-65X95K model.

In addition, there are various technology updates, some of which will be available for the entire 2022 Sony TV lineup. The Sony Bravia XR cognitive processor has been slightly upgraded to include a number of features. Depth Control emphasizes in-focus objects while “muting” the background image, which is more in line with the natural visual perception of the eyes.

The algorithm that corrects color contrast has also been improved. Now he not only has the ability to optimize colors depending on their brightness, but also can adjust the color saturation. As a result, we get brighter colors and more natural gradients on the screen.

New to the Sony XR X95K series is Netflix’s Adaptive Calibration Mode. It combines the familiar Netflix calibration mode with environmental optimization. This is a brightness adjustment based on ambient light. Details in dark scenes are clearly visible even in bright sunlight. Parallel to this is the addition of a calibrated BRAVIA CORE mode for the high-quality streaming streaming of the same name.

As for the interface part of the Sony XR-65X95K Mini LED TV, as it should be for the 2022 model, the TV has two HDMI 2.1 interfaces with full 48 Gb / s. The ports support VRR (Variable Refresh Rate), ALLM (Auto Low Latency Mode), and eARC.

The idea is to support 4K @ 120 Hz video with VRR and HDR, including Dolby Vision . This requires further clarification. In addition, there are two HDMI 2.0 connectors at 18Gbps for 4K @ 60Hz content. According to the manufacturer, the VRR function will be available from the start of sales of the Sony X95K series without any software updates.

The separately purchased BRAVIA CAM for 65X95K Mini LED TV is the Full HD version. It is easy to install on top of the TV. This camera is equipped with built-in microphones. With the help of the camera, you can not only conduct video chats through Google Duo. The gadget comes with some interesting features.

For example, the camera recognizes where the viewer is sitting and adjusts the TV’s acoustics according to their position. This takes into account the distance and viewing angle of the TV. In addition, the room can be “measured” and create the optimal sound. A nice feature in the camera is the “proximity alarm”.

It is activated when someone gets too close to the XR-65X95K TV screen. In addition, the camera recognizes when the viewer leaves the room and at that moment reduces the brightness of the TV to save power. And the last of the interesting features of the Bravia Cam is the integration of TV gesture control.

For “heavily encrypted” it is possible to close the camera with a special curtain, and turn off the microphone using a mechanical regulator. On the left side of the TV is a mechanical mute button for the Bravia X95K’s built-in near-field microphones.

Briefly about the sound equipment of the Sony Mini LED X95K TV with Backlight Master Drive. Also, as in last year’s series, there is Acoustic Multi Audio technology in the new Sony X95K. But there is some “acoustic update” that sets the Sony XR-65X95K TV apart from last year’s models.

Sony’s X95K series is redesigned with a more refined dual woofer, optimized tweeters on the sides of the screen, and two front-facing midrange speakers. As a result, the entire sound spectrum from high tones to bass has been improved. The sound system has a total power of 60 W, which is the maximum possible (at the moment) for built-in acoustics.

What else can be attributed to innovation. Perhaps this is a premium remote control. Only the Sony Z9K, A95K, A90K and X95K TV series will be equipped with such a remote control. The new remote has fewer buttons and is 35 percent smaller than the standard remote. The key layout has been optimized and the control buttons are now much better placed.

Sony’s QD-OLED models use a brand new display technology, and the OLED series have been further optimized and are now available from 42 inches and up. We can say that from 2022 there are noticeable updates compared to last year’s models. And all the new products from Sony deserve attention.