TCL P615 is a new line of 4K LED TVs with HDR 10 support. The main distinguishing feature of the line is extreme budget availability. This series TVs display Dolby Vision and SDR content very well. Runs on Android TV platform with TCL interface, which provides access to Play Store and application library. The user interface, while smooth, can sometimes glitch.

Overall, the picture quality of this entry-level TV from TCL is good and can be excellent if set up correctly. In our TCL 55P615 4K HDR review, as a representative of the series, we’ll take a closer look at the TV’s capabilities.

TCL created the P615 series with aesthetics in mind. The minimalist design of the TCL P615 TV is intended to showcase what is on the screen first. The viewer should get maximum space inside sleek, thin frames in black plastic that look really beautiful in any room.

The almost bezel-less appearance and slightly thicker lower bezel with the TCL logo give the model the feeling of something more significant than just a budget TV. With thin legs spaced out along the edges of the cabinet, you may need a wide cabinet. But, as usual, the VESA 200 × 200 (55 inches) mount standard is provided for wall mounting. 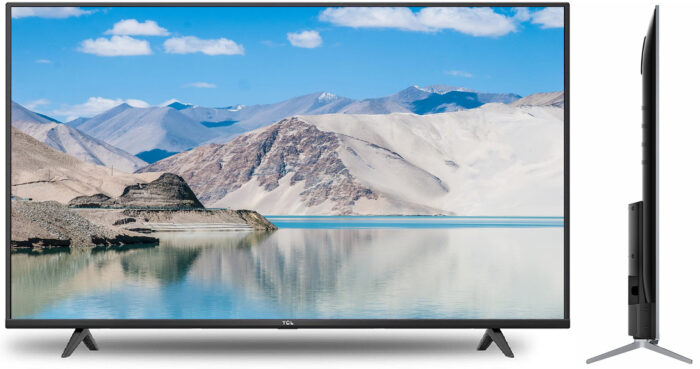 The P615 TV is based on a conventional 50 Hz VA panel. This largely determines the quality of the picture on the screen. Vertically aligned matrices have a high native contrast, which is not the case with competing IPS panels . Someone will pay for this relatively low viewing angles. TV is best viewed directly in front of the screen.

Depending on the diagonal, the P615 has a contrast ratio from 4000: 1 to 5000: 1. This produces a fairly deep black. In a dark room, i.e. in a home theater environment, movies on this TV will look comfortable. There is no further improvement in contrast in this series.

Although the presence of direct backlighting, as in TCL TVs of the P717 series , would allow implementing the function of local dimming of the backlight in different areas of the scene. As for the implementation of the HDR mode, the peak brightness value of 270 nits cuts at the root of the dream of its quality implementation. Perhaps the picture is getting better than in standard SDR, but for the full functioning of the mode it is better to have at least 450 nits of maximum brightness.

The TCL 55P615 TV uses a 10-bit color panel. These panels display over a billion color shades for smooth color transitions and natural colors. True, in this model, 10 bits are not entirely honest, but 8 bits + FRC. Those. the real color depth of the matrix is ​​8 bits, but due to the flickering of the pixels, additional shades are obtained and everything in the end looks like 10 bits. The TCL P615 4K TV comes with video streaming apps like Netflix, Prime Video, and YouTube out of the box. In addition to this, TCL Smart TV also offers a Google Play Store allowing users to download and install the apps of their choice. Plus the TCL P615 also supports HD streaming on all major video streaming platforms.

As mentioned above, smart functions are based on the Android TV operating system. It uses its own shell from TCL. The P615 TV comes with built-in Google Assistant and an intelligent remote control to support voice commands. For the sake of fairness, we will say that such a remote control does not reach all countries. A regular mini-remote control is sold in the Russian Federation.

You can also use the built-in Chromecast to wirelessly stream content from smartphones and laptops. In terms of hardware, the TCL P615 4K is backed by a 1.1GHz 64-bit 4-core Cortex A55 processor along with a Mali470 GPU with a peak clock speed of 800MHz.

On TCL 55P615, the sound quality is almost good. What does it mean? The audio system with a total power of 19 watts is capable of sounding fairly passable at moderate volume. And this is not too loud, although it is quite suitable for most TV programs. You can adjust the sound mode to concentrate on your voice. And then you will appreciate the purity and clarity of speech.

As for the sound effects in the corresponding films or music playback, then you cannot do without a soundbar. Dolby Atmos content plays purely nominal. The TV simply does not write on the screen that this sound file is not supported. Although if you turn on the virtual surround sound mode – well, you can distinguish east from west. 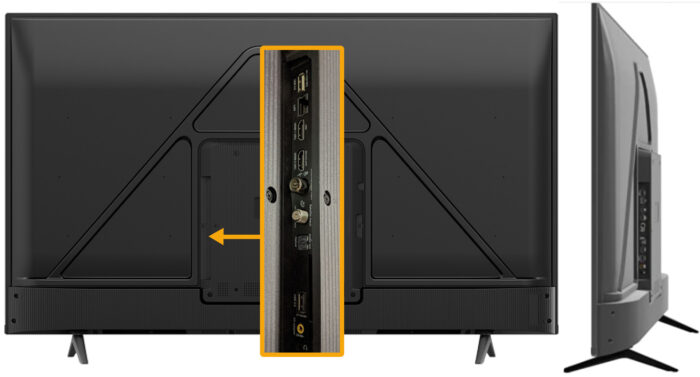 The ascetic list of switching capabilities corresponds to the budgetary nature of the TCL P 615 TV. It includes 3 HDMI inputs (1 version 1.4b and 2 – 2.0) and two USB 2.0 ports. The options are 2 HDMI 2.0 inputs and two USB 2.0 ports. There are also mini-jacks for 3.5 mm headphone output and analog AV input. In addition, there is an optical audio output and an RJ-45 LAN port. Wireless communication is represented by Wi-Fi 2.4 GHz and Bluetooth.

The P615 budget series is ideal for any use that requires an internet connection, broadcast, or access to streaming services. TCL P615 series TVs come with a good three-year warranty. Of course, this series does not have ideal characteristics in terms of the image, and in terms of smart functionality, too. But given the more than humane price of TVs, they can be unambiguously recommended for purchase to those who are not particularly demanding on TV parameters.