TCL X10 is assembled in Poland, all materials -even the box- come from China, while its weight is 27.4 kg. The 65×10 panel combines several new technologies in order to achieve the desired “full” color volume, the wide viewing angle and the high contrast and the high brightness that our HDR era wants.

The panel, therefore, is formed of three main parts. Back and forth, on his back, there is the light source. It is a 65-inch panel with 15,360 mini LEDs that emit blue color. The multitude of these mini LEDs creates 768 zones (!) Of local light control, when the good LCD TVs on the market today do not exceed 480 zones.

In 65X10 there are 20 mini LEDs per zone. The second part of the panel is a film called QDEF (Quantum Dot Enhancement Film) that contains trillions of quantum dots of red and green radiation, so that combined with the blue of the mini LEDs to create the required white light.

Thus the LCD element, which is in front of the TV (ie on the panel) receives a white light rich in color volume (information), able to meet to a large extent the needs of the color standards DCI-P3 and REC.2020. We do not hide it, this television throws us directly into the depths of the latest scientific research on panels.

The 768 zones also need a powerful processor to manage them in real time. TCL TV has two processors, one dedicated to the panel and one for other functions such as input management and the Android TV operating system. 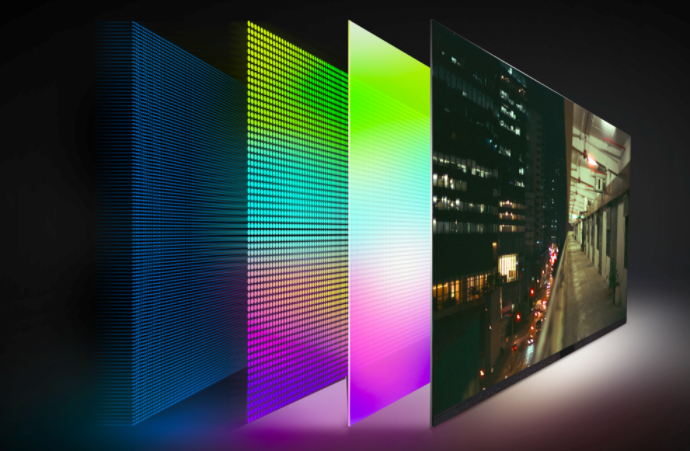 For such a sophisticated panel to function smoothly, it also needs image processor assistance to smooth motion, gaming response speed and sharpness (motion resolution). Information that the manufacturer has taken into account, which was also found in our tests.

The panel is 100Hz (120Hz), 50 (60) times shows image and 50 (60) times turns off (the light source) in succession, so the manufacturer fights blur, judder and other anomalies that can “catch” the human eye when an image moves fast. When the user selects the game mode, then the TV “turns off” the backlight control system, ie the 768 zones become one, to achieve low lag time, which here is close to 20msec.

Price accepted by gamers. With that in mind, we measured a brightness of 1800nits, which means that the X10 can be placed among the good TVs of the year. Recall that the Samsung Q90R has a brightness of 2000nits and LG OLEDs close to 700nits.

The X10 also has deep black for LCD, which is due to the 768 local light control zones. The black of the TV is one of the best we have received in recent years from an LCD TV, with almost zero nits.

In terms of design, the TV differs from the rest of the series and stands out from the Onkyo sound bar that is integrated in its base. A rectangular construction lined with fabric that hides inside two speakers (channels) for the mid-high. The low ones are produced by the TV itself, by two woofers that shoot down.

It is a 2.2 channel system, in the center of the sound bar there are microphones for the voice assistants (Google Assistant and Alexa) to “catch” our voice from afar. If you are afraid of this, at the back of the 65×10 there is a mechanical switch that turns the microphones off. There is Dolby Atmos decoding, even AC4 which is the Dolby Atmos of TV channels, but also DTS HD.

The base of the TV “ties” the panel in the center, a metal basel stands out at the bottom and the thin metal stripes around the screen. The TCL X10 comes with two remote controls, a Bluetooth to catch remotely that has a microphone and a simple infrared. 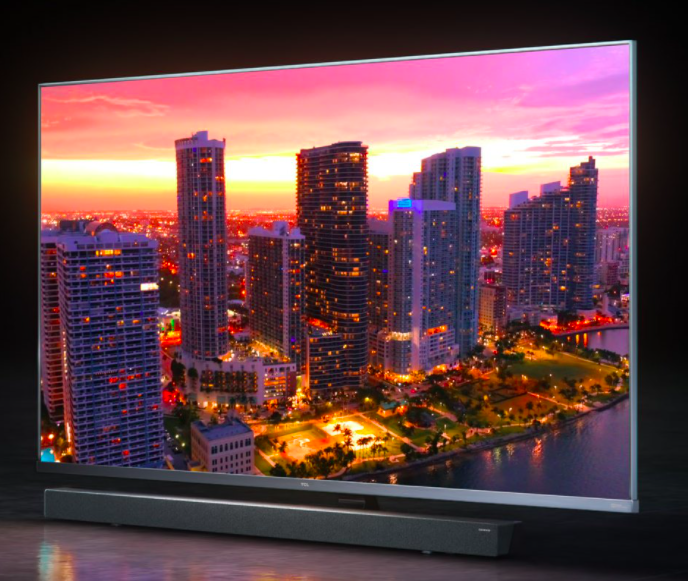 As for HDR, the TCL of the test is also rich, pronouncing Dolby Vision and HDR10 +. The menus are comprehensive, without much difficulty in navigating with depth settings. There are three (and not four, really how many are enough?) HDMI 2.0 ports, two USB 2.0, satellite receiver and analog input.

Although the TV has its own sound bar, its sound is not what we expected. It is clean, catches large levels without deforming and has the expected volume. But it does not have the density, extent and speed of a purebred sound bar. Small bad, after all whoever gets such a TV, will definitely take care of it and audio.

Few TVs out there have good sound, such as Philips OLED984. But where the TCL of the test stands out, as an LCD TV, is in the picture. The viewer immediately realizes that he has something wonderful in front of him.

The screen presents a fluid natural image that provokes with its “gloss” and the extent of its colors. Responsible for this is its dense rich white light of mini LEDs. The color range is huge, beyond the capabilities of the human eye.

Gold is presented as gold on the screen and not as bronze. In dimly lit shots, black kept fading, while shadows and grayscale appear completely natural. To perform well, the X10 needs a reliable image source, such as a good UHD 4K player or 4K (Netflix) productions with a high-speed home line. Unlike lower definition sources, such as Greek channels or SD signals, the TV betrays (or is betrayed) by its upscaler, which is not as effective as a Samsung or a flagship LG.

This does not mean that the TCL X10 is not a top TV, especially when receiving UHD signals (with or without HDR content). In this case, TCL threatens the established manufacturers in the market and grinds its teeth, causing them to compare themselves with it. Its image does not have peaks, weaknesses, “clouds”, blur or mismanagement of light, like the TCL quotes, but it is “written” with mastery on the screen and that is a fact.

Light and color retain their high values ​​even when content is as demanding as Dolby Vision. The control of the backlight reminded us of plasma eras, while in general the whole atmosphere of the image had a “lamp” character, that is, no savagery or cruelty.