Vizio OLED55-H1 Review: Can compete with the top 4K TVs 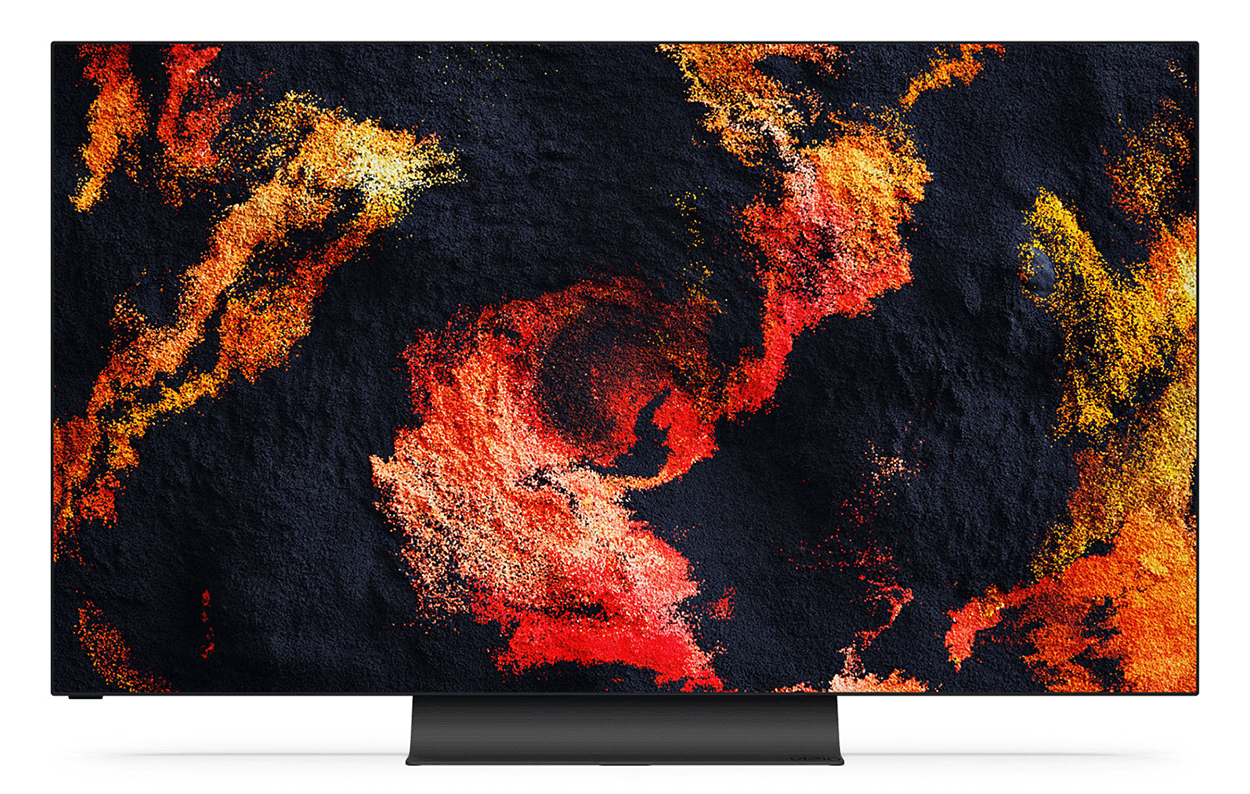 Despite the fact that Vizio mainly present their products in the overseas market, it was interesting for us to review the Vizio OLED55-H1 as a representative of this series. Let’s see if the OLED55-H1 can compete with the top selling OLED models.

Inside the box there is a remote control (without voice control), batteries for the remote control and some parts of the Vizio OLED55-H1 TV stand. There is also an information booklet, but there is no instruction manual for the TV. Perhaps the manufacturer relies on the consumer himself and his ingenuity for installation.

The installation of the Visio OLED55-H1 must be carried out by two people. There is a warning about this on the huge stickers on the front of the TV. This should be taken into account as the OLED screen is quite flexible. To secure the stand, the TV is supposed to be laid on a flat surface.

When installed, you will feel the screen flex slightly. This is especially true for the large diagonal OLED65-H1, so special care must be taken when assembling and installing. It would be nice for the manufacturer to take an example from the Sony XG95 packaging , where the TV does not need to be stowed , and the stand legs are mounted in an upright position. The relatively thin body of the OLED55-H1 TV is attached to a graceful platform in the center of the screen. The second part of the stand is installed on the back of the case. The main stand has a wave-like profile and looks slightly futuristic.

The body is made of dark matte plastic. The connectors are located on the left side of the TV, facing sideways and downward. The interface compartments are closed with decorative covers. Bottom cables must be routed to the center first and then down through the center auxiliary stand. Believe me, it is often not so easy to lay the antenna cable, and you have to leave the decorative panel cover aside.

The Vizio OLED55-H1 has three HDMI ports facing downwards. One of them has eARC and a couple of others have 4K @ 120Hz support. Several ports on the side are composite, HDMI and USB and are easier to access. Vizio has tried to keep the back of the OLED H1 in a design minimalism. But in practice, this turned out to be superfluous.

Indeed, with the “correct” laying of wires, their length will increase by half the width of the TV case. Some information about HDMI ports. There are only two interfaces labeled 4K @ 120Hz, and Vizio claims these are HDMI 2.1 ports.

That is, they are capable of supporting variable refresh rate (VRR) and automatic low latency mode (ALLM) at 4K @ 120Hz. Upon verification, it turned out that this is not the case. But Vizio has already released a firmware update that resolved this issue. Therefore, the Sony PlayStation 5 will work well with the TV. The operating system in the Vizio OLED55-H1 TV is SmartCast, the digital tuner does not support the DVB-T2 standard. Therefore, the use in the European segment simply as a “TV out of the box” will not work, unless you use a satellite receiver. Here you should immediately think about purchasing some kind of external set-top box, for example, on Android TV .

As you’d expect, the Vizio OLED55-H1’s black levels are impressive. It’s an OLED TV, after all, so when the pixels are off, you get true blacks. But that’s not all it takes for a good image. Good gradients are always needed, fading to dark grays, shadow details and blending.

And here in the Vizio H1 OLED there is a small drawback. In fact, there may be problems with viewing dark images if the TV is installed in a bright room. The image does not smoothly go beyond black, so there is no shadow detail. And viewing ideal dark scenes is difficult.

Here’s a tip – place the Vizio H1 OLED in a dark place. On the other hand, the black uniformity is perfect, which allows the H1 OLED TV to be tuned for excellent contrast. The gray gradient on the screen, like the uniformity of the gray, is almost perfect.

What’s interesting about Vizio’s H1 OLED is that when factory calibrated, the image itself isn’t very bright. The result of the checks is only 400 nits at peak in HDR and about 300 nits in SDR. As you can see, this is not a big difference between HDR and SDR content.

However, after resetting the TV and tweaking a few parameters, performance was significantly improved to match the manufacturer’s stated values: almost 400 nits in SDR and 650 nits in HDR using 10% of the window filled with white.

Adjusting the brightness level can often adversely affect color accuracy. However, the standard colors of the OLED55-H1 are fantastic after working through the image calibration mode. DCI P3 is 98% covered.

Although the OLED55-H1 handles colors well, the handling of dynamic scenes lags slightly behind. Of course, there are anti-blur features in the specification. But problematic 24p content may play with some jitter. Naturally, this was done with the motion and shake compensation settings disabled for the sample.

However, when these enhancing settings are turned on, and even at the lowest levels, we get the ill-fated ” soap opera effect .” Chances are, as most users assume, it’s not worth the compromise.

Unfortunately, image processing is an area in which Visio must develop. It can be said that the clarity of the image is incomparable with the OLED models of LG or Sony. Perhaps that is why the price segment is lowered. Image processing on Vizio TVs has improved markedly this year, but the H1 OLED is still weak in handling low-resolution content and low bit depths. But the high-res content on the H1 OLED looks amazing.

Many people are interested in the part of the OLED TV review, which talks about the possibility of screen burn-in. Although burnout is not as much of a problem now as it was in previous versions. However, there are still risks in this area, and any OLED TV manufacturer complicates some of the functions against this “OLED disease”.

So, if a user likes to play the same game for ten hours a day, or the same TV channel looms on the screen every day, the problem may be that graphic banners “burn” the screen where they are located.

However, the OLED55-H1 fights against this kind of burn-in technologically. If the OLED-H1 TV notices a static image on the screen for more than 30 seconds, then the H1 simply goes out. In addition, the series is equipped with pixel shift technology and luminance limiting function to avoid OLED burn-in. Oddly enough, the H1 OLED’s sound quality out of the box isn’t impressive. But after rebooting the TV and making small adjustments, the 2x15W system improves dramatically in terms of sound quality. Still, it is believed that such a great TV deserves a separate soundbar.

Luckily, Vizio has some of the most affordable, high-performance soundbars on the market today. In particular, the Vizio Elevate soundbar would be a great choice.

After connecting PlayStation , the process was expected to be fully automated. However, Vizio’s H1 OLED automatically recognized the console and marked the appropriate input, but the image quality was not up to par.

After walking a little through the settings, we find that the TV does not accept HDR, although the PS5 “outputs” this standard by default. Having sorted out the settings of the H1 OLED, we managed to get the desired image. By the way, you can also do something in the PS5 settings – manually toggle some parameters to create 4K HDR at up to 120Hz. In general, it’s worth a little tinkering here. And the H1 OLED TV is a great choice for a gaming TV with a 3ms pixel response time.

The Vizio H1 OLED models are definitely interesting. Vizio’s main achievement is price reduction, but at the expense of image quality. Indeed, Vizio has competitors like LG OLED. But as we can see, Vizio has reduced the cost of OLED TVs to almost $ 1000. After updating with various patches, in the end, the Vizio H1 OLED turns out to be a good TV with an OLED matrix.

What you can pick as a competitor is the LG CX OLED series . This is probably a direct competitor to the Vizio H1 OLED, but it costs more. For an extra penny, you get slightly more accurate image processing. But the Vizio H1 OLED also handles high-definition content well, and most potential buyers can save some money.

Philips TVs to support Calman auto-calibration for the first time