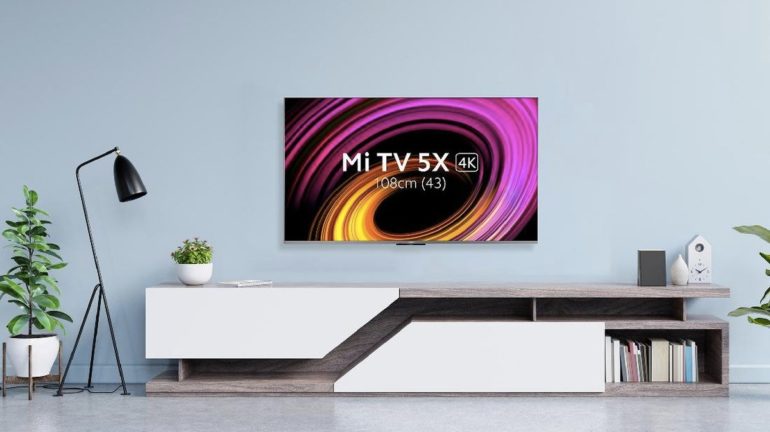 We are used to the fact that Xiaomi and its sub-brand Redmi cover most of the budget and mid-range TVs. The manufacturer focuses on the ratio of price and quality, and this applies not only to budget series.

Big screens, lots of features, thoughtful software and design define the Mi TV lineup in many ways. One of the latest series of this company is Mi TV 5X. The brand hopes to promote the range of TVs without compromising what attracts customers – competitive and reasonable prices.

Priced at just over Rs. In this case, the buyer does not spend too much. Some of the key features of the Mi TV 5X 55 include Dolby Vision support, Google Assistant voice control, and a combination of Android TV 10 and the popular PatchWall UI. Consider the review of Xiaomi Mi TV 5X 55 as the best 55-inch model of this brand.

Until now, Xiaomi Mi brand TVs have carried the Mi logo, but with the arrival of the Mi TV 5X, there has been a change. The company has announced that it is moving to “Xiaomi” as its main brand for future products. And the new Mi TV 5X is an example of this, although it is still called “Mi TV”.

The Xiaomi TV 5X series is represented by three TVs – Xiaomi TV 5X 55, Xiaomi TV 5X 50 and Xiaomi TV 5X 43. A TV with a 43 diagonal is slightly different from its older counterparts, both in price and in some specifications in terms of sound.

Right below the screen, prominently on a silver band, is the new Xiaomi logo. Right below the logo is a module with some indicators and a power button. The rest of the frame around the screen is much thinner and has the same silver color. This gives the Mi TV 5X series a distinct look that stands out from competitors and other Xiaomi TVs such as the Redmi TV X or the Mi TV 4X range .

The Mi TV 5X TVs aren’t as thin as some of the flagship models we’ve reviewed before. But the Xiaomi Mi 5 X is reasonably well built and not too thick at the bottom. The Xiaomi Mi TV 5 X 55 looks good for a TV in this price range whether placed on a wall or on a horizontal surface. Part of the back of the Mi TV 5 X has a fiber-like texture, with some of the interfaces pointing down and some to the left of the screen.

“Static” (less used) ports, including Ethernet, optical audio out, composite AV in, and antenna port, face down. Two USB ports, three HDMI 2.1 ports and a 3.5mm audio jack on the side. The Xiaomi Mi 5 X TV can be installed on the metal stands included in the kit. Or wall mount with any suitable VESA kit. 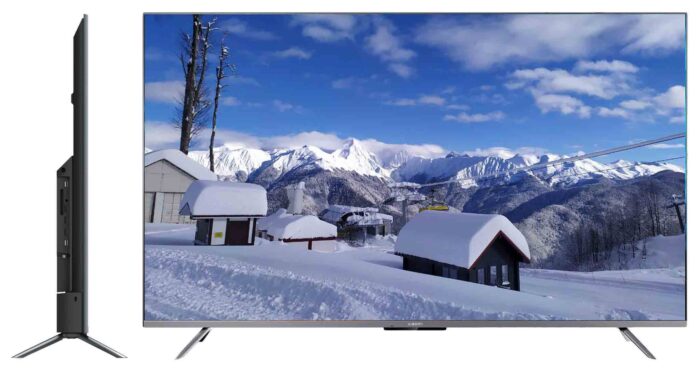 The Xiaomi Mi TV 5X 55 model is equipped with a 55-inch UHD LED-backlit screen and supports Dolby Vision and HDR10+ formats . The series has a rated audio power of 40W with support for Dolby Atmos and DTS-HD through a dual speaker system.

The Xiaomi TV 5X 43 version comes out with a limited audio power of 30W. The HDMI ARC specification is supported on one of the HDMI ports. In addition, there is dual-band Wi-Fi ac and Bluetooth 5.0 for wireless connections. The Xiaomi Mi TV 5 X is equipped with a quad-core processor, 2 GB of RAM and 16 GB of storage for data and applications.

While the overall design of Xiaomi TVs has changed over the months and years, the company’s approach to the remote has remained largely the same. The Mi TV 5X series has the familiar minimalist Xiaomi remote. As usual, but still disappointing, the required AAA batteries are not included in the box.

The remote itself is a device that everyone is used to, and the company’s software tweaks such as Quick Mute and quick access to settings have long compensated for its physical shortcomings. The remote is equipped with buttons so that the user can quickly get to any place in the Xiaomi TV software. It’s easy enough to navigate both the stock Android TV UI and Xiaomi’s own PatchWall UI.

Other key features of the Mi TV 5X include hands-free access to the Google Assistant (voice dialing). Built-in Google Chromecast with support for UltraHD and HDR casting from apps and services, low latency auto mode for use with game consoles, and the ability to use Alexa as your default voice assistant (not available in all regions).

The TV has a built-in microphone that can be set to be always on so that you can give “OK Google” or “Hey Google” commands. You can turn off the microphone if you have privacy concerns or just don’t want to use voice commands. At the bottom of the TV, right below the Xiaomi logo, there is a physical microphone mode switch. 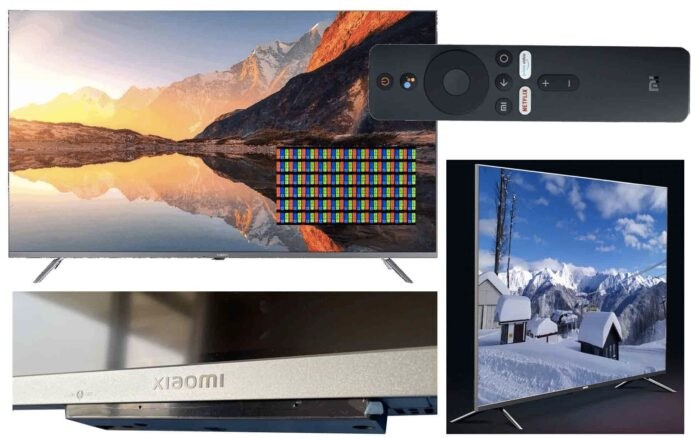 Like the remote, working with the Xiaomi Mi TV 5X software is familiar to anyone who has used Xiaomi TVs before. The TV runs on Android TV 10, both in the stock Android TV UI and Xiaomi’s own UI PatchWall 4 program. All major apps are supported and users have full access to the Google Play Store for Android TV to download any app.

The stock Android TV user interface will also be familiar to users of other Android TV devices, as it works here without any real restrictions set by the manufacturer. This point is especially important in connection with the current world restrictions.

Xiaomi Mi TV 5 X settings are available from anywhere in the interface, including when playing content, by long pressing the Mi button on the remote control. A short press of the button will switch to the PatchWall launcher, which shows a wide selection of content from various streaming services.

It’s worth noting that PatchWall 4 is a bit of an improvement over previous versions. IMDB ratings integrated into most titles, a new kind of information page for titles with additional information, and more. PatchWall provides easy access to TV settings and other source inputs, as well as various applications that can be installed on your Xiaomi Mi TV 5 X TV.

It is also worth mentioning that the Mi TV 5X supports the “Mi Home” app via PatchWall, which allows you to control IoT devices at home through your TV or using voice commands. But this requires the “Mi Home” app associated with your Google account.

Apart from attractive appearance and features, the Xiaomi Mi TV 5X 55 model is also well-equipped to provide a pleasant viewing experience. Picture and sound quality is very good for a 55-inch TV at this price point. However, the user will experience intermittent lag and UI performance issues.

The Mi TV 5X 55 has a High Dynamic Range (HDR) specification with support for HDR10+ and Dolby Vision. Naturally, the 55-inch option is best for content like Dolby Vision movies and Netflix shows , which look significantly better than standard DVB-T2 over-the-air channels.

The UHD and Dolby Vision picture on Netflix on the Mi TV 5X screen is a pleasure. The picture has a gentle, calm tone, the colors do not stand out as much as on premium TVs. But, nevertheless, the overall impression is refined and spectacular image. The picture is clear and detailed, without much sharpness. UHD content is smooth, and Dolby Vision looks even better with brightness and contrast.

Despite a certain boost in brightness and the ability to have different levels of contrast and exposure in the same frame in HDR, the biggest benefit of Dolby Vision on the Mi TV 5X was color tone. The TV captures the atmosphere and essence of the show well.

Most LED TVs, especially those at the bottom end, tend to choke a bit when it comes to black levels. The Mi TV 5 X model, while not as impressive as the OnePlus TV Q1 Pro (with local dimming), does quite well in darker scenes and black tones.

Yes, there is a soft gray tint on the screen, but it’s not as intense or distracting as on the Redmi TV X55. As a result, dark scenes in dimly lit rooms look decent. Vibrant scenes can be viewed even when sunlight hits the TV.

Standard dynamic range and SDR content are not as attractive for HDR viewing. However, on the Mi TV 5X 55, playback was decent. A variety of FullHD content is a pleasure to watch, and overall the Xiaomi Mi TV 5 X delivers a consistently bright, crisp and clear picture at any resolution. 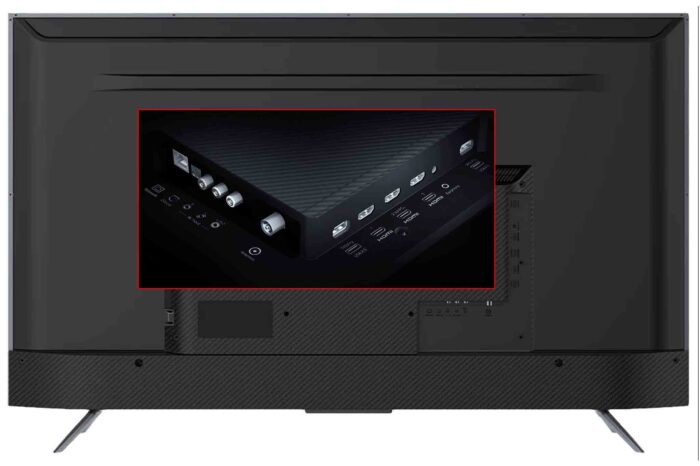 The sound on the Mi TV 5X is comfortable and acceptable in normal viewing situations. Accompaniment can be quite loud thanks to the 40W speakers. The sound is well tuned and uniform, without sudden jumps in volume. Interestingly, while Dolby Atmos is supported on the TV and activated via a slide switch in the audio settings menu, Mi TV 5X does not support Dolby Atmos auto-detection on Netflix and Disney platforms. Support for 5.1-CH sound is available here (at best).

When Dolby Atmos is enabled on the Xiaomi Mi TV 5 X TV, it enhances the sound quality at the hardware level. There is still a slight difference in sound quality for most of the content. Some “virtualized” surround sound effects can be heard while playing games. In general, the sound becomes more refined and detailed. However, a good speaker system such as the Sony HT-S400 will be considered a priority for use with this TV.

Although the picture and sound of the Xiaomi Mi TV 5X in general are positive points, and the work with the built-in software was satisfactory for the most part, there are some drawbacks. For example, there are Mi TV 5X crashes, which include random delays and image stuttering when streaming UHD content. Delayed response to remote control button presses and several Wi-Fi connection drops.

You may also encounter delays during the display of subtitles. In some cases, when the words appear on the screen with a delay of about a second or two. This creates some difficulty when viewing content in a foreign language. Such problems are not critical and are often resolved by turning the TV off and on again. But they arise from time to time, so do not forget about them.

Xiaomi’s focus on value for money and relative to the competition continues to pay off. The Mi TV 5X series is a good example of why affordable TVs are worth considering. At $400 this is the best choice for a 55-inch 4K TV right now.

The Mi TV 5X models provide a good combination of design, features and performance. First of all, the line offers you exactly what you want and expect from such a TV. By and large, there are some flaws in this series, but they are not so big and Xiaomi Mi TV 5X will be an excellent choice.