Both manufacturers are from China, and they try to be on a par with Philips, Samsung or LG. And although we find various flaws in their TVs, these manufacturers cannot be discounted. In 2021, Xiaomi is releasing a QLED model, which we will look at in the Xiaomi Mi TV Q1 75 review.

It should be noted right away that the Xiaomi Mi TV Q1 TV is designed for a lower price segment, unlike the OnePlus Q1 TV, although the equipment of these models is approximately identical. From the history of Xiaomi, you can recall that the release of the first TV models is dated 2013. And only just a few years ago Xiaomi entered the international market.

Immediately, we note that Xiaomi releases the Mi TV Q1 series with only one 75-inch diagonal. The Xiaomi Mi TV Q1 75 comes with interesting features and an affordable price for this size. The Xiaomi Mi TV Q1 75 received an excellent look with very thin bezels around the screen. The decoration is made with aluminum components in a silver color. The bottom panel is slightly wider than the main bezel, there is a logo in the center under the screen. 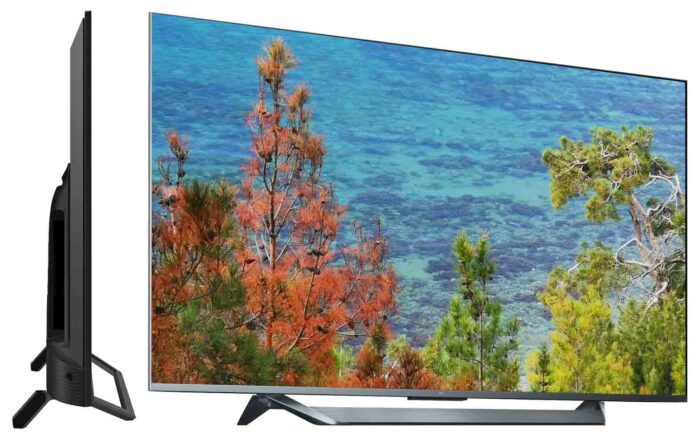 The TV stand, located in the center of the case, is quite wide. It is made of brushed aluminum and perfectly complements the front design. For a 75-inch 4K TV, choosing the shape of such a stand is a must. The model is stable when installed on a horizontal surface.

The back of the TV Mi TV Q1 75 is made in black. Case material – embossed plastic. The lower rear is slightly wider. It contains various entrances. The interface part is located at the bottom left of the Mi TV Q1 case. The power cord plugs into the right. The VESA wall mount has a size of 400 x 300 mm.

The supplied remote control is very similar to the remotes that come with other models of the brand, such as the Mi TV Lux . The remote is equipped with Netflix and Amazon Prime Video app keys, a button in the center to activate the Google Assistant, and more.

As we mentioned earlier, the Xiaomi Mi TV Q1 75 model in question has appeared with some pretty interesting features. This is a more advanced model than the options from this Chinese brand previously reviewed on our UltraHD.su resource.

The new version of Mi TV Q1 2021 is equipped with QLED technology, which uses quantum dots to improve color reproduction. As a result, the Mi TV Q1 model covers 95% of the DCI-P3 color spectrum. The applied backlight is of the Full Array type, which is capable of providing a much better level of contrast than conventional LED Edge backlighting.

The matrix is ​​illuminated by 384 LEDs and has 192 adjustment zones. As a result, more precise control of image brightness is achieved. The contrast ratio in the applied VA matrix can reach 10,000: 1 with a maximum peak brightness of 1000 nits. In normal mode, the average brightness is about 500 nits.

Oddly enough, the manufacturer has endowed its brainchild with various HDR formats. Here we see support for Dolby Vision, HDR 10+, HDR 10 and HLG – a complete set, which is the main competing factor for this model. But the 75-inch Mi TV Q1 model has 10-bit color depth (8-bit + FRC). For lovers of game consoles, which has recently become more relevant, we can note the presence of the HDMI 2.1 interface in the reviewed model Mi TV Q1 75. Thanks to this, you can play content at 120 Hz in 4K resolution.

Unfortunately, at the moment there is no support for variable refresh rate (VRR), although the specifications claim automatic latency mode (ALLM). Despite this, we can say that Xiaomi has launched an interesting model in terms of price / quality and has Quantum Dot technology with a native matrix refresh rate of 120 Hz and an HDMI 2.1 port.

As for the operating system, the 75-inch model Xiaomi Mi TV Q1 QLED is built on Android TV version 10. The TV runs on a Mediatek MT9611 quad-core processor in conjunction with a Mali G52 MP2 or ARM Mali-G52 MC2 GPU. There are only 2 GB of RAM and 32 GB as the main memory. This is probably not enough at the moment.

Despite the fact that the Android TV system has long been “rolled back” on TVs from other manufacturers, the version from Xiaomi differs in some moments. I am having trouble connecting an external wireless keyboard. In particular, with the methods of switching the national keyboard layout – dancing with a tambourine often does not help.

The TV uses a 2.4 CH sound scheme . The Xiaomi Mi TV Q1 QLED model is equipped with a dual channel pair of 15 W each and supports Dolby Atmos and DTS-HD Master Audio formats. Each channel has a pair of full-range speakers and a tweeter. The location of the emitters is downward. For a normal Atmos implementation, it is recommended to mount the model on a horizontal surface. In addition to the mentioned HDMI 2.1 ALLM interface, the Mi TV Q1 75 QLED TV has a pair of HDMI 2.0 (ARC; CEC) and a pair of USB 2.0 – these are the main connections. Internet or local area network is provided via Ethernet RJ45 port or Wi-Fi. Onboard there is a satellite dish input, S / PDIF interface and AV composite input. The antenna tuner is capable of receiving DVB-T2 signals.

Based on past Xiaomi reviews, the model in question has problems with image processing. Moreover, you will not find such artifacts on the screen from other brands.

On the other hand, Xiaomi Mi TV Q1 has built-in ChromeCast and MiraCast support for the ease of use of the huge screen and your smartphone or tablet. Sound system output power of 30 watts is two tweeters and four woofers. It is said “loudly” about woofers, but the sound is sufficient for most content.

Recently, many smart TVs have been using quad-core processors to handle their custom upscaling algorithms that convert HD content to 4K. Of course, this is not unique to the Xiaomi Q1 model in question, but the upscaling works without notice.

And here again one should focus on the fact that the price for such products is often much higher, especially for the 75th diagonal. So if you’re looking for a relatively inexpensive 75-inch 4K TV, this might be a good option.