Soundbars come in all shapes, sizes, and prices, ranging from $ 70 for devices like the Xiaomi Mi Soundbar to € 2,499 for premium models like the Sennheiser Ambeo Soundbar. But there are mid-priced devices such as Sony’s new HT-X8500 soundbar , which is priced at $ 445. At first glance, the Sony HT-X8500 is a 2.1-channel soundbar with a built-in subwoofer.

But Sony is promising a lot more features for this panel – Dolby Atmos, DTS: X and virtual 7.1.2 surround sound. We take a look at the Sony HT-X8500 Soundbar to see if it is the perfect companion for your new big screen TV.

Like other soundbars available today, the Sony HT-X8500 is a long, narrow plate with two full-range speakers at the ends and two subwoofers in the center. The soundbar is the same length as a regular 40-inch TV, but that doesn’t mean its use is limited to TVs of this size.

You can place the HT-X8500 soundbar on a table, in front of your TV, or mount it on the wall, right below a wall-mounted TV. In any case, the ideal position for the soundbar is directly below the TV screen. If you place it on the same table or stand as the TV, you will have to be careful with the positioning;

The soundbar is quite tall and can block the IR receiver and the bottom of the screen. The HT-X8500 has a metal grille covering the drivers and a textured top panel. It has touch-sensitive buttons for power, source selection, Bluetooth and volume control, as well as six indicator lights for Atmos, DTS: X, Vertical Surround, TV, HDMI and Bluetooth. The first three are sound modes, and the last three are for the source being used. The Sony HT-X8500 soundbar lacks a display, which is a disadvantage for the relatively expensive option. The soundbar shows its status and additional information using only blinking indicator lights, in various combinations, depending on the settings. It was difficult for us to memorize all the combinations and often had to consult the manual to find out if we were doing something right when adjusting the parameters on the soundbar.

However, many of these parameters only need to be configured once. The soundbar will only work after it is properly connected to your TV and original equipment.

The Sony HT-X8500 soundbar doesn’t have a lot of ports and inputs, relying on the few it does for most of its functionality. It has an HDMI input (version 2.2), an HDMI output (which supports HDMI ARC and eARC), an optical audio input, and a power input.

The soundbar provides HDMI pass-through, up to 4K resolution, with HDMI-CEC, HDR and Dolby Vision support. From sound modes, the HT-X8500 supports a variety of Dolby formats up to Atmos, a variety of DTS formats up to DTS: X, and a proprietary vertical surround standard that is said to upscale sound to a virtual 7.1.2-channel output.

Bluetooth 5 communication is also supported, but only with SBC and AAC codecs. Dolby and DTS are automatically enabled when playing compatible content and supported equipment.

Using remotes to control the soundbar

Although optical input and Bluetooth are available as connection options, we found the best results were obtained when the Sony HT-X8500 Soundbar was connected to our TV via HDMI. The soundbar also has its own remote that can be used to control power and adjust settings.

HDMI-CEC support is a big bonus here. We were able to use our remotes, for the TV and source device, to control the power and volume on the soundbar, minimizing the need to constantly swap remotes.

Anyway, this soundbar has a very functional and useful remote if you need one. Sony HT-X8500 comes with an included HDMI cable.

Let’s now talk about the most important thing – how the Sony HT-X8500 works. We used a soundbar with an Android TV connected via HDMI. 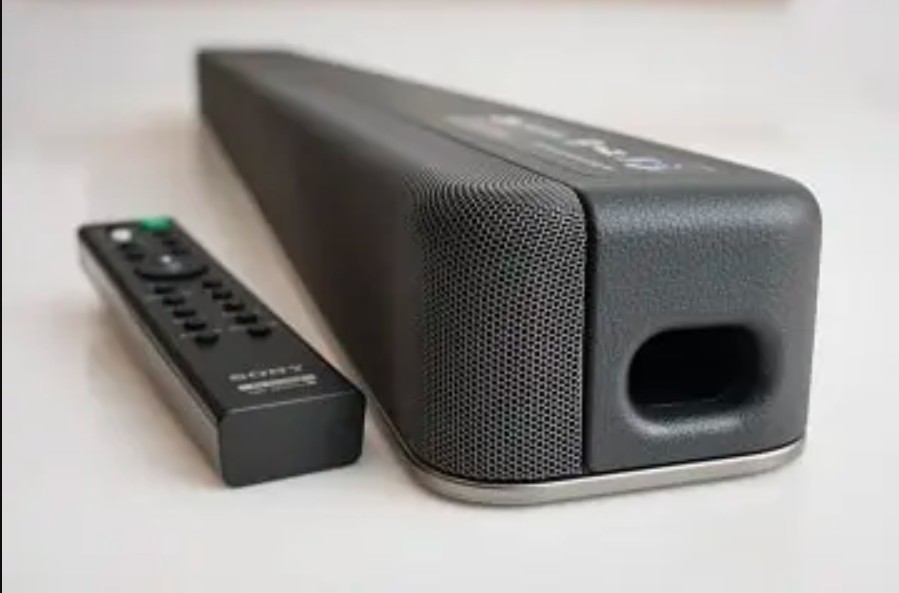 In addition to content using the TV’s built-in media player and smart interface, we also used an Amazon Fire TV Stick 4K connected directly to the soundbar using the pass-through feature to send video to the TV.

We immediately felt the difference in sound quality and even what seemed soft and insignificant when navigating through the Fire TV Stick 4K interface sounded better on the Sony HT-X8500 soundbar. After about a minute of comparing audio between the TV’s built-in speakers and soundbar, we moved on to the episode of The Tick that aired on Amazon Prime Video.

Again, when using the soundbar, there was a noticeable difference in sound quality, mainly due to its superior setup for TV shows and movies. The Sony HT-X8500, like any good soundbar, has a strong mid-range that is very good for communication.

Music and voices sounded clear and sharp on the Sony soundbar, while softer voices were clear and loud enough to be heard while maintaining their character. The soundbar not only offered a volume boost, but also a decent sound boost, allowing you to listen to the TV comfortably at a higher volume.

While some soundbars simply offer more volume and a bit of width over your TV, the best options promise virtual surround sound. Indeed, Sony promises this with its Vertical Surround mode, which claims to offer virtual 7.1.2 surround sound. The numbers represent seven conventional channels (two front, two side, two rear and one center) and a subwoofer, as well as two additional vertical channels for ceiling speakers. While the sound has some directional meaning when using this mode, it is not very big. A more expensive soundbar may offer a wider soundstage, but the Sony HT-X8500 doesn’t quite achieve this level of depth and width, and the idea of ​​vertical surround sound seems useless.

We found the soundbar to provide a decent voice over for combat scenes and background sounds. It has strong bass, almost repeating what a dedicated subwoofer would do. While many buyers prefer a separate subwoofer, the Sony HT-X8500 dispenses with one and still delivers decent sound. This fact makes this mode worth considering if you need bass but don’t have room for a separate subwoofer.

Using the soundbar with a smartphone

Finally, we also used a soundbar paired with a smartphone via Bluetooth. This is not an ideal use case for the Sony HT-X8500 as its audio setting is better geared towards video content than music. Strong lows and mids are heard, and its width and volume make the HT-X8500 good for occasional music listening.

However, the sound signature is not ideal for this and Bluetooth itself is not as good as HDMI when it comes to sound quality. However, Bluetooth does offer some flexibility in that you can connect the soundbar to a compatible TV to use it as an external wireless speaker.

If you spend up to $ 600 on a TV, you may not be inclined to spend more than $ 200 on a soundbar. However, if you have the money for a better TV, you should also get the right soundbar to pair with it.

The Sony HT-X8500 is by no means a premium soundbar, but it’s a decent mid-range option that suits most TVs and most day to day use. However, if you are very demanding on sound quality and want the best, the Sony HT-X8500 may not be for you.

At this price point, the Sony HT-X8500 has significant competition, with brands like Yamaha, Polk Audio, Bose, and JBL offering decent products, with or without separate subwoofers. Therefore, Sony’s offer makes sense if you don’t have room for a subwoofer and is definitely worth considering if convenience is high on your priority list.