Cambridge Audio AXR100 Stereo Receiver is the most powerful in the AX range and can drive even large floor-standing speakers efficiently. The device is made in a metal case with a thick aluminum front panel, the location of the controls on which is well thought out. In its center there is a matrix display that is easily readable from a long distance, under which most of the buttons are grouped – for selecting a signal source or switching operating modes. The volume control on the right-hand side of the front panel can also be used to adjust the bass and treble tone through the menu system.

The Cambridge Audio AXR100 stereo receiver is equipped with three line inputs (plus one additional front panel), outputs for connecting a recording device and a subwoofer. The AXR100 also has a built-in MM phono stage for the turntable. Of course, do not forget about the high-quality built-in AM / FM tuner, which is capable of receiving RDS information and has a memory for 15 preset settings in each band. In addition, the receiver is equipped with a digital-to-analog converter based on the Wolfson WM8728 microcircuit, and has two optical and one coaxial digital inputs.

The power supply unit of the device has a proprietary toroidal transformer, which has a reduced level of electromagnetic interference and the ability to quickly deliver a significant peak current to the load. There is also a 5V USB connector on the rear panel. The Cambridge Audio AXR100 has Bluetooth version 5.0 A2DP / AVRCP with SBC support. The stereo receiver develops at the output of each channel up to 100 W of sound power when connected to speakers with an impedance of 8 ohms. The rear panel of the Cambridge Audio AXR100 has screw terminals for connecting two pairs of speakers. 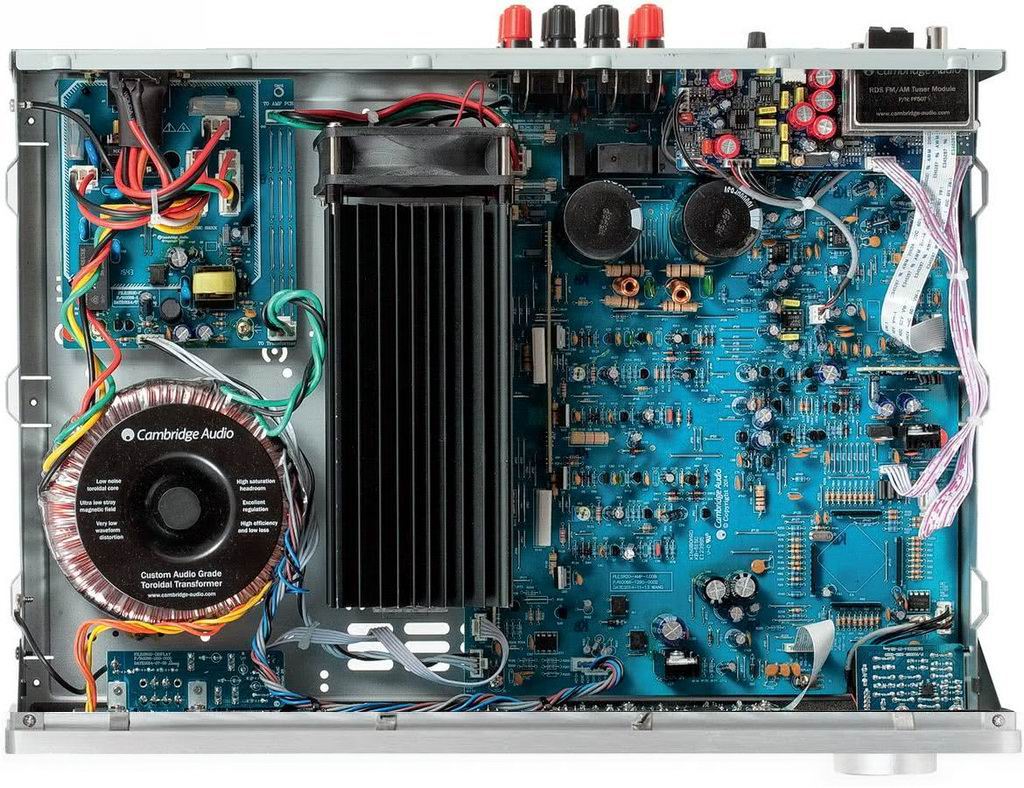 The device has the trademark Cambridge Audio sound signature with neat bass, detailed and natural mids and pleasant, non-tiring treble. The receiver is suitable for music lovers with a passion for music of various genres, and is able to become the center of a completely universal audio system.

There were times when the word “receiver” was not identified with home theater, as it is today, but with the most progressive Hi-Fi, because the best models, as a rule, combined the advantages of an advanced radio tuner with a powerful two-channel amplifier. However, then everything changed. Who is now interested in broadcasting if music from anywhere in the world can be listened to with even greater quality over the network? Power, too, has long ceased to be a trump card – any Hi-Fi fan for his stereo system will take an integral or, what is more, the same one with monoblocs, but hardly a receiver. This is how the once influential class of technology, conquering not only by the quality of reception and clarity of sound, but also by design, descended to second or third roles. The current range of stereo receivers looks extremely dull: 90 – 95 percent of it consists of very cheap models (often made in the form factor “midi” or “mini”). And it is not easy to find in it something worthwhile in “full size”, with serious sound capabilities, but not at an exorbitant price. One of the most attractive models in the recent past was the Topaz SR20 – a rather weighty device with honest 100 watts in each channel (8 ohms, mind you!), With a developed switch and speaker selector, integrated FM tuner, tone control, phono stage and DAC. He had everything to get a place in the living room and work with serious acoustics, and not serve as an appendage of a game console, computer or karaoke. But this model disappeared suspiciously quickly – even before the entire Topaz series was transferred to the Cambridge Audio archive.

Now there is great news for those who did not manage to acquire the G20 in due time: it has returned in the form of a hundred from the new AX line! The components in this series are entry-level, but are said to be based on ideas from the more expensive Cambridge Audio CXand Cambridge Audio Edge . And although it is not specified anywhere on which ones, I do not think that there is only PR behind what has been said. The London office of Cambridge Audio employs about 20 engineers, and it is precisely in such teams (unlike large firms or companies of one developer) fertile ground for engineering creativity and the exchange of ideas. Moreover, the company has already proven its ability to create “the best sound for its money” many times. The AXR100 datasheet is sparse, but not required. Everything is already visible. The “graphite” color scheme is modern, and the overall design is clearly borrowed from the “twenty”.

This is indicated by the type and location of the controls on the front: the main row of combined selector buttons, the lower row of radio reception and “preset” control buttons, a laconic matrix display, a volume knob and a pair of jacks – an output from a telephone amplifier (6.3 mm) and an input Aux in (3.5mm). The topology of the rear panel, on which the forced cooling system can be seen (during the test, by the way, it never reminded itself of itself with the noise of a cooler) is also generally familiar. Everything is in the same places: three line inputs and a Phono MM input, a recording output, a subwoofer (monophonic and tuned to a bandwidth up to 200 Hz), two optical inputs, coaxial, Of the innovations – only the Bluetooth module (supports only standard codecs), fixed directly on the back panel. Now you can wirelessly connect any tablet or smartphone to the receiver, and this is the only functional difference from its predecessor. And even the DAC is the same – Wolfson WM8740. And the tone control is not classical, but electronic (+/- 10 dB at 100 and 20,000 Hz).

I bet none of the above impressed you. I also wanted to see here a button for bypassing the tone block, and a USB Type-B input, and other attributes that bring the stereo receiver closer to serious integrators. But it would be fundamentally wrong to classify the AXR100 as a consumer product. Firstly, it is too thoroughly made for this – the chassis has the proper rigidity and vibration protection, the boards are made very high quality and accurately.

Secondly, in the power supply system we see not just anything, but a solid toroidal transformer and a pair of 10,000 uF buffer capacitors. Thirdly, the 550 Watt power consumption when delivering 2 x 100 is one of the signs that the terminals are working deep in class AB, and not in some kind of rigid energy saving mode. Finally, not too impressive parameters for distortion and dumping factor in this case, rather even a plus, after all, we are clearly faced with an amplifier without circuitry bells and whistles (at the output of each channel – only a pair of bipolar NJW0281G / 0302G) and, perhaps, even without deep OOS. And simple “textbook” constructions in audio, as we know, if assembled on a high-quality and well-selected element base, often produce very interesting sound.